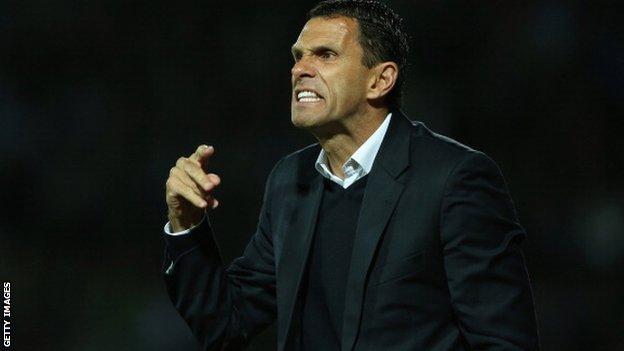 Poyet accused Leeds' Luke Varney of diving for a spot-kick which helped the visitors level at 1-1 before the break.

But Warnock claimed the forward was pushed inside the box by Bruno Saltor.

"If it was my player he dived, but because it was his player he was pushed. It's a funny one. We call it hypocrisy," said Poyet.

"He's in the list of hypocrites now, Neil, unfortunately. He went to the other side - hypocrite."

The Uruguayan who spent 12 months at Elland Road as assistant manager under Dennis Wise six years ago, was also annoyed that Leeds' Michael Brown had remained on the pitch following a foul on Andrea Orlandi that resulted in a yellow card in the 10th minute.

"Mr Brown, who had an absolutely fantastic game and I'm pleased for Michael because I played with him, but he shouldn't have been on the pitch and everyone knows that," added Poyet.

Leeds twice came from behind to level and Paddy Kenny's 74th-minute penalty save denied Brighton a first win in seven games.

Warnock described his team's draw at the Amex Stadium as a "super point" and said his players played with "guts" and "Yorkshire grit".

The Leeds boss said: "Gus is not happy, is he? They're on about Brown should have got sent off, somebody says Luke Varney dived. Well, he got pushed, you can see he got pushed."