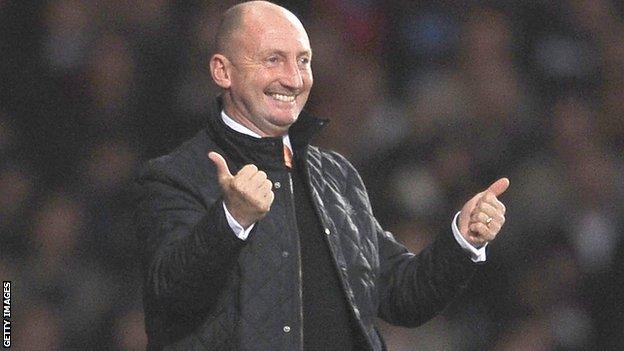 New Crystal Palace manager Ian Holloway has built a reputation for providing as much entertainment off the pitch as his teams do on it.

BBC Sport takes a look at a selection of his most memorable pre and post-match moments during his 16-year managerial career. Eagles supporters can expect more of the same from the quotable Bristolian's time at Selhurst Park.

"To put it in gentleman's terms, if you've been out for a night and you're looking for a young lady and you pull one, you've done what you set out to do. We didn't look our best today but we've pulled. Some weeks the lady is good looking and some weeks they're not. Our performance today would have been not the best looking bird but at least we got her in the taxi. She may not have been the best looking lady we ended up taking home but it was still very pleasant and very nice, so thanks very much and let's have coffee."

QPR boss Holloway came up with the quote of the century to describe his team's lacklustre performance against Chesterfield in 2003.

"Every dog has its day - and today is woof day! Today I just want to bark."

After QPR's promotion-clinching win at Sheffield Wednesday in 2004.

Holloway had his own ideas on what Avram Grant should be called after he took over from Jose Mourinho at Chelsea.

"I couldn't be more chuffed if I were a badger at the start of the mating season."

Holloway was quite pleased after QPR beat Cardiff.

"I watched Arsenal in the Champions League the other week playing some of the best football I've ever seen and yet they couldn't have scored in a brothel with two grand in their pockets!"

On Arsenal failing to take their chances from a match in 2006.

"I think the Bosman thing is a pile of donkey dung."

BBC Sport columnist Holloway contemplates one of the biggest changes in football in 2007.

"It's still in my body and I'll have to pass it at sometime but my passing's absolutely diabolical. That's what I told the doctor: "What chance have I got of passing anything - did you see me play?!"

Holloway speaks about his kidney stone in 2007.

"He's six-foot something, fit as a flea, good-looking - he's got to have something wrong with him. Hopefully he's hung like a hamster! That would make us all feel better!"

Holloway searches for a chink in the armour of Cristiano Ronaldo in his BBC column in 2008.

Life beside the seaside

"One minute I was painting the lounge, the next I'm being asked to manage a Championship side. My wife will have to finish the glossing."

Holloway bounces back into management with Blackpool in 2009.

I love Blackpool. We're very similar. We both look better in the dark

"Why haven't they got cameras? The officials can speak to each other easily enough now. Why aren't we using laptops that are linked up and can give a decision in five seconds? A chimpanzee could do it - with not much training.

"We might as well go back to being cavemen, grab our girl by the hair, drag her into the cave whether she wants to come in or not because we may as well live in that age. We've come forward, haven't we?"

The Blackpool boss makes the case for video technology in his own inimitable style in October 2009.

"If you're a burglar, it's no good poncing about outside somebody's house, looking good with your swag bag ready. Just get in there, burgle them and come out. I don't advocate that obviously, it's just an analogy."

Holloway on his Blackpool players after the 4-1 defeat by his future employers Crystal Palace, also in October 2009.

"I am more than happy [at Blackpool] and I am afraid the chairman will need a hell of a tub of cream to get rid of me - I'm like a bad rash and not easily curable."

Holloway denies reports he is ready to leave Bloomfield Road in January 2010.

Holloway after his Blackpool side fought back to draw 2-2 against Palace in March 2010.

"I love Blackpool. We're very similar. We both look better in the dark."

"Paul Furlong is my vintage Rolls Royce and he cost me nothing. We polish him, look after him, and I have him fine-tuned by my mechanics. We take good care of him because we have to drive him every day, not just save him for weddings."

"'I have such bad luck at the moment that if I fell in a barrel of boobs I'd come out sucking my thumb."

"[Plymouth defender] Hasney Aljofree's bust his hooter. He can smell round corners now."

"I am a football manager. I can't see into the future. Last year I thought I was going to Cornwall on my holidays but I ended up going to Lyme Regis."

"Most of our fans get behind us and are fantastic, but those who don't should shut the hell up or they can come round my house and I will fight them."

"It was lucky that the linesman wasn't stood in front of me as I would have poked him with a stick to make sure he was awake."