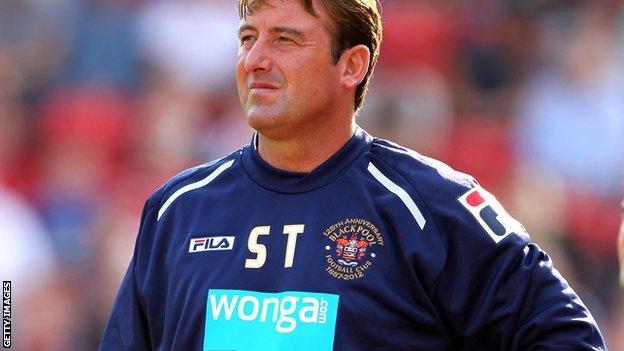 Blackpool caretaker boss Steve Thompson says he would like to take the managerial job on a permanent basis.

The vacancy at Bloomfield Road arises after Ian Holloway left to become the new manager at Crystal Palace.

Thompson took charge of the Tangerines as they lost 4-1 at Derby and insists he will not be joining Holloway.

"It is all up to the chairman but I will get another chance to show my credentials when we play Sheffield Wednesday on Tuesday," said Thompson.

"[Holloway] has taken Keith Millen to Palace with him and my only priority is making sure we are in the right frame of mind to give a true picture of our quality against Wednesday.

"I'd like to think that the things the club has achieved in this period will be remembered because I believe I have played an important part."

"I've been a number two here and I've had some good times here. I've had two promotions, three Wembley visits and I'd like to think I've been a part of that."

Who is Steve Thompson?

Coaching career: Became head of youth at Blackpool in 2005. Promoted to first-team coach in 2006 and in 2008 became assistant manager

But Thompson wants an opportunity to rectify the side's defensive frailties having lost a manager who had been at the club for three years.

"It came as a bad blow after a very difficult week and you could see in that performance how much it took out of the side," said the former Bolton, Burnley and Leicester player who has been assistant manager at Blackpool since 2008.

"It's a fantastic club with some good players, which sounds crazy after a 4-1 defeat, but I've still got a lot of confidence in those lads.

"I would not like to think that any decision on my future will be based solely on what happened in one match.

"It is not long ago that these players were getting rave reviews. They are the same players but we need to sort a few things out defensively to start moving back in the right direction again."