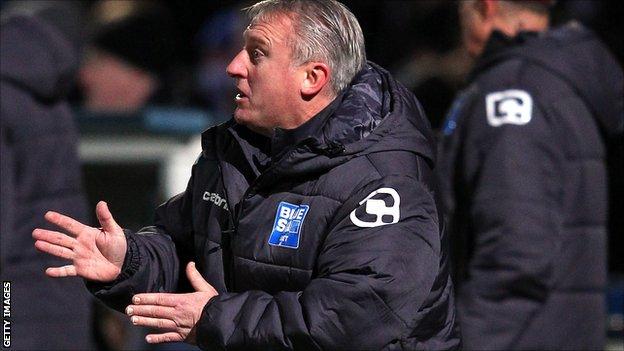 Chelmsford City boss Glenn Pennyfather said he was stunned to see his non-league side beat League One Colchester United in the first round of the FA Cup.

The Clarets caused an upset to win 3-1 at the Melbourne Stadium on Saturday.

"When you got a result like this you're a little bit in shock," Pennyfather told BBC East Sport.

"It's hard to take everything in. I'm overwhelmed that we've won. You dream about it and now it's a reality."

He added: "I fully expected it to be a different result so it is quite unbelievable."

The Blue Square Bet South club, 61 places below their opponents on the football ladder, were rarely troubled by the U's as a Donovan Simmonds brace and Jamie Slabber strike gave them victory in the first encounter between the Essex rivals for 44 years.

"When we were 1-0 up I thought we might have stung them into a bit of action but I thought we got our game plan spot on today," said former Southend and Ipswich midfielder Pennyfather.

"We knew we had to stop them playing. They're a really good side in good form. I'm delighted with how we went about our work and when we got the second goal you start to believe then.

"This is just rewards for the last couple of years where we've reached the second round and - no disrespect to the sides we've played - they haven't been money spinners and the dream tie you expect. But today was a dream tie. My players were magnificent."

Chelmsford are now one win away from being in the third round with the big hitters from the Premier League - but for now they will eagerly await the result of Sunday's second-round draw.

"I'll be with the family, as I always am on a Sunday, probably tucking into a nice roast," said the Clarets boss.

"There's two schools of thought. Do you want one of the easier sides at home or do you go away for the money spinning tie? Whoever it may be we've made the second round and have an opportunity of meeting the big boys.

"I'm hoping for a home draw again. But wow, we've beaten Colchester from League One - so bring them on."