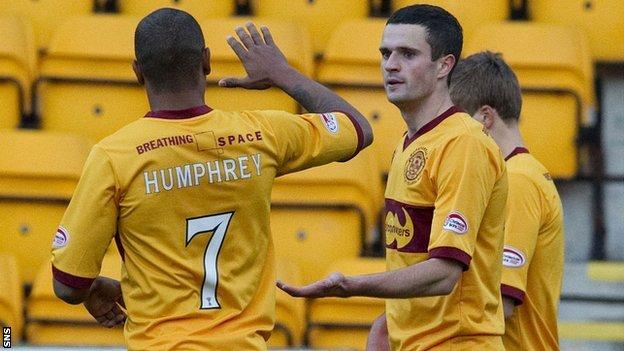 Motherwell manager Stuart McCall was delighted his side "stopped the rot" with ending a run of four straight defeats.

And McCall admitted to relief that his own side had found their scoring touch after four barren matches.

"We haven't had too many good days of late, so we're pleased," he said.

"We won't get too carried away but, obviously, the main point is we've not scored in four games, so to get off to such a good start was pleasing.

"I think we'll have burst a few coupons today because I think most people would have had St Johnstone as a home win, so it was nice, there was a lot of character in there.

"I'm disappointed we didn't manage to keep a clean sheet because I thought we've done really well and we just switched off a little bit.

"We won't get carried away, but I'm pleased for the lads because they've taken a bit of flak and bounced back well at what is a tough place to come."

McCall said it was important psychologically his side had picked up something from the McDiarmid Park match after a poor run of results.

"We've gone three SPL matches, four if you include the cup game [defeat by Rangers], without scoring, and, obviously, confidence is a massive thing in football.

"We've been trying to re-iterate all week that you don't become a bad team overnight.

The Motherwell manager hinted that a tactical change proved key to the win, allowing Jamie Murphy freedom to torment the St Johnstone rearguard from a deeper position.

"We played it slightly differently and put Murphy in behind and obviously that helped," said McCall.

"I think it's one of his favourite grounds, he got two here last time.

"I had a little word with him on Thursday about where he would be playing and I think that put a little spring in his step."

And, for McCall, despite the showing of the likes of two-goal Murphy, it was the overall team performance which delighted him most.

"There were some outstanding individual performances but as a team we stuck at it," he said.

"Because it's not easy, when you've lost four on the bounce - you need character, and you need desire, and we showed that.

"As a manager, when you've got the type of players we've got in this team, then we've just got to keep believing, put yourself in the right areas, and take the chances when they come along."

However, the Fir Park boss took time to re-assure Estonian striker Henrik Ojamaa that he was unconcerned by his lack of goals in recent matches.

"I look at Henrik last week," he said. "He created three great chances and, if we take them, he's got three assists.

"As much as we say he needs a goal, if he keeps contributing to the team like that then he'll stay in the side."