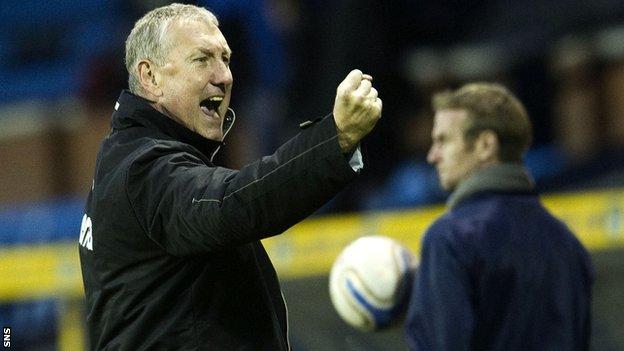 Andrew Shinnie and Billy McKay were on target for Caley Thistle, with the latter converting the second of two penalties awarded to the visitors.

"It's been a hard week, but we won in the cup and picked up four points from six in the league so that's not bad," Butcher told BBC Scotland.

"For me they were both penalties. Last season we didn't have a penalty for about 15 months and all of a sudden we've got two in a game, but the main difference is us getting into the box with the ball and having a go at teams."

Butcher saw his side win twice in four days after beating Rangers in the Scottish Communities League Cup on Wednesday, and he paid tribute to his two central midfielders.

"It's like the Great Wall of China in front of our back four with Owain Tudur Jones and Ross Draper. They're huge men to get round, up in the air or on the deck.

"They've got telescopic legs. It's amazing the amount of blocks and tackles they make which obviously helps the back four.

And despite a victory that moves them up to third in the Scottish Premier League, Butcher is concerned with more than just results.

"Continuity is something that we didn't have last year," he added.

"We had 27 different back fours. We've got continuity, we've got confidence in the side and we've got goals. We always score, and once again we have scored.

"It's sometimes not about results. Sometimes it's about continuation of performances and keeping your standards high, which we've done fantastically well."