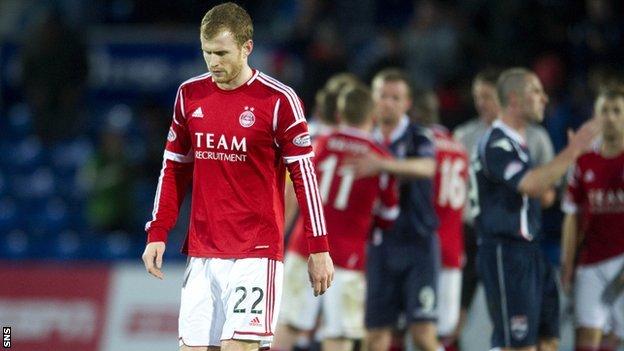 Craig Brown criticised his Aberdeen side and demanded an improvement in their next outing after they suffered a 2-1 defeat by Ross County.

County took the lead through a Mark Reynolds own goal and doubled their advantage with a Steven Ross strike.

Niall McGinn pulled one back for the Dons but they left Dingwall empty handed.

"But I think we deserved more than we got from the game."

Winger Jonny Hayes had to settle for a place on the bench but he sparked life into Aberdeen when he was introduced 20 minutes from time.

And Brown conceded Hayes could have featured earlier.

"It's easy with hindsight, but Jonny had a hard shift in midweek in the cup tie [againt St Mirren] and his legs were suffering," added Brown.

"But he made an impact when he came on and created a goal for Niall McGinn.

"At half-time, I felt we were so dominant in the first half that if we did that in the second half we would get something.

"But the second goal just after half-time was a real boost for Ross County. It gave them a huge lift and gave us an uphill mountain to climb.

"Today the fans have been very disappointed and I apologise and promise them that we'll make up for that.

"In the dressing room the players have been left in no doubt that they've let a lot of people down and there can be no repetition of that."