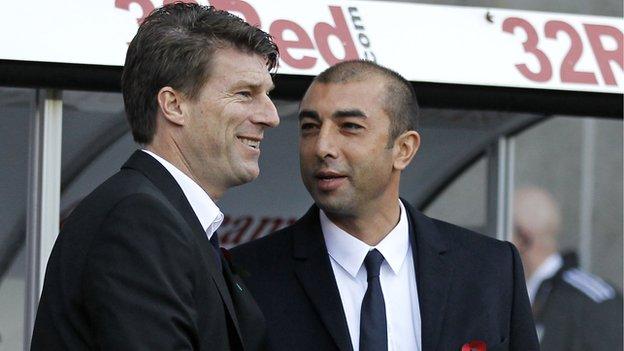 Boss Michael Laudrup says Swansea have shown they can compete with the Premier League's best by holding their own against three "big clubs" in a week.

The run began with Swansea's 1-0 defeat at Manchester City before their 3-1 Capital One Cup win at Liverpool.

"[We played] three big, big sides, [with] great players and I think they only created five or six chances in three games," said Laudrup.

It's been a change for Pablo Hernandez coming from Valencia, but I think he's getting better and better

A Victor Moses header gave Chelsea the lead at the Liberty Stadium on Saturday, but Pablo Hernandez beat goalkeepr Petr Cech from the edge of the area two minutes from time to earn Swansea a point.

In the process mid-table Swansea knocked Roberto Di Matteo's side off the top of the Premier League, and joined Manchester United and Queens Park Rangers as the only teams to take points off Chelsea this season.

Laudrup believes his decision to send Danny Graham on for Leon Britton and Nathan Dyer for Wayne Routledge after 65 minutes paved the way for the fightback.

"We had to do something because we were 1-0 down and I think it paid off," said the Dane.

"We came back into the game and dominated and we deserved to get the point.

"It was a really good performance. I think there have been three this week.

"We respected the quality of the opponent, but I said more or less we could expect a game like last Saturday against Manchester City.

"And to be honest, it is true that in the first half they had more possession than we had.

"But apart from the header from [Fernando] Torres that was saved on the line by Leon [Britton], I really don't recall any [Chelsea] chances.

"And in the second half, apart from the goal, they only had a free-kick."

Laudrup also believes 27-year-old goalscorer Hernandez, who was signed from Spanish side Valencia in August, is improving following his crucial second goal for the club.

"It's been a change for Pablo coming from the Spanish League, Valencia, to here, but I think he's getting better and better," said Laudrup.