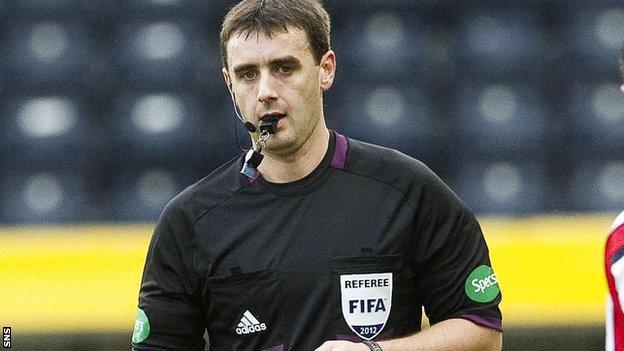 Shiels did not wish to go into detail for fear of being disciplined.

"That's all I'm saying because I don't like people being disrespectful to me or my club," Shiels told BBC Scotland.

"I shook hands with him after the match and I didn't say one word to him and he came out with a sarcastic retort to me and I've just reported him."

Norris awarded Caley Thistle two penalties - one that Cammy Bell saved and the second from which they went 2-1 ahead after the goalkeeper was sent off.

Kilmarnock thought they ought to have had a penalty award themselves when Rory McKenzie was upended in the box with Inverness already ahead through Andrew Shinnie.

Shiels insisted that he was unable to even say whether he thought those had been correct decisions, otherwise he would be in trouble from Scottish Football Association compliance officer Vincent Lunny.

"I can't answer that," he said. "I work in an industry where it's mandatory that I give interviews but I'm not allowed to tell the truth.

"It wouldn't happen in any other industry in the world and that rankles me.

"Vincent Lunny will not allow me to give an opinion. You ask him why. I want answers to that.

"If I tell the truth, I'll get myself and my club in trouble."

Shiels said that, if he gave his opinion on the referee's decision, "he could bear a grudge against me" but praised Caley Thistle manager Terry Butcher for his own relationship with officialdom.

"I know Terry was complaining that they did not get penalty kicks and I don't think he's got into any trouble yet," he said.

"It's working for him and his work with the referees is outstanding and he's done really well there - I wish I knew the secret."

Liam Kelly cancelled out Shinnie's first-half strike with a stunning goal after the break, but Billy McKay won the points for Inverness from the penalty spot in an exciting match at Rugby Park.

"It wasn't a brilliant watch for me," revealed Shiels. "I am sure it was a good game, it was eventful.

"We stood off them and I was really disappointed. We lost the match in the first 30 minutes.

"After that, it was like [against] St Mirren here - we pulverised them and didn't get any justice at all."