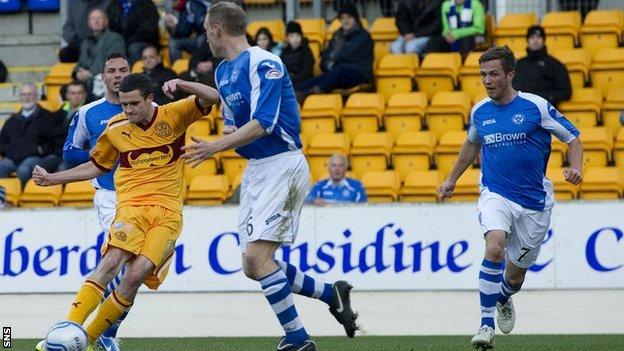 St Johnstone manager Steve Lomas was left frustrated by defensive errors that cost his side the chance to go top of the Scottish Premier League.

"You just can't give that type of goal away at home and expect to win football games," said the St Johnstone manager following

Murphy opened the scoring in the first minute and netted again midway through the first half. David Robertson pulled one back for Saints after Law's 73rd-minute strike.

Lomas was particularly infuriated by his side's slow start to the match, with Murphy scoring 'Well's first inside a minute.

"We just didn't get out of the blocks," he said. "We'd said that Motherwell would be coming out of the blocks, especially after three defeats and we'd have to match that, but some of our defending was criminal.

"The first two, it's just a lump over the top and, from our point of view, that just ain't good enough.

"The last two games have obviously been a massive disappointment. We hoped that we'd bounce back from Celtic [Tuesday's 5-0 defeat in the League Cup], but that wasn't to be the case, so it's really frustrating."

"We were all determined, because the carrot was, you could go top of the league.

"We've now got to get back to the training pitch and get back to basics because, if you do the basics well, it gives you a chance, but you can't concede the goals that we conceded."

The Saints boss also insisted his players had not got carried away by their recent impressive run of form, equalling the club record for an unbeaten sequence in the top flight.

"We've always had a sense of realism about it, but it doesn't make defeat any easier to take," he added.

"We've got an honest set of boys and they know when they've played well and when they haven't.

"Four or five of them did well, the rest not so well. And, if you want to win games of football then we've got to have the boys form one to 11 bang on their game.

"If you're not defending well then you've got to take your chances when you get them, and we didn't do that."