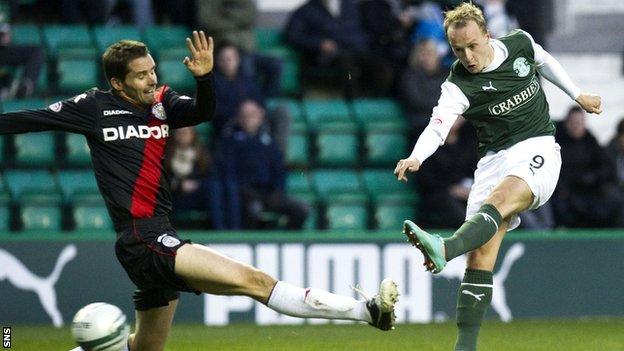 Pat Fenlon insists that Leigh Griffiths is keen on remaining at Hibernian but knows the striker may attract other suitors if he continues his rich form.

Griffiths, on loan from Wolves until January, scored both goals in to take his tally for the season to 11.

"He's somebody that we want to keep and he wants to stay, which is great, " said Hibs manager Fenlon.

"So we have to make sure we do our work and get that done."

Fenlon conceded that Hibs were far from their best against the Buddies but the victory lifts his side to the top of the Scottish Premier League, although Celtic are just one point behind with two games in hand.

And Griffiths, in his second loan spell at Easter Road, played a huge part in the success.

"He was the difference between the teams," was the opinion of opposition manager Danny Lennon, who went on to say that he thought Griffiths was ready to press for a place in the Scotland squad.

"He's a special talent at the moment, that's for sure," added Fenlon, who revealed that he has left the bargaining with Wolves down to chairman Rod Petrie.

And on hearing that the 22-year-old does not figure in the plans of those in charge at Molineux the manager said he was "surprised, but very pleased".

"Leigh is a very, very good player as I have said before," Fenlon continued.

"His scoring ratio to chances is fantastic. He is like that in training as well. He very rarely misses the target.

"Today he has hit the post twice, had one disallowed and scored two. I don't know how many shots he had but he wouldn't have had many more."

When asked about the possible interest in the SPL's leading scorer from other clubs, Fenlon simply shrugged it off, saying: "That's football."

"It's the same with the rest of the players. People will look where we are at the moment and think we may have one or two decent players.

"That's part of management. We brought these players to the club and if we lose them, we have to try and replace them. That's my job."

On moving top of the league on a Saturday before Celtic play for the second time this season, Fenlon said: "We'll enjoy it but we are not shouting from the rooftops.

"We weren't brilliant today by any stretch of the imagination but I think the fans realise they have a team that cares.

"The players work hard for each other and the club.

"I thought St Mirren were the better side in the first half. Second half was a bit better but we got a bit edgy in the last five minutes and were hanging on a bit instead of just seeing the game out.

"It's a good sign, winning when you're not at your best. The players have got great character and they dug in and worked hard to make sure we stayed on top.

"Defensively, I thought we were a little bit better and I was happy with that."