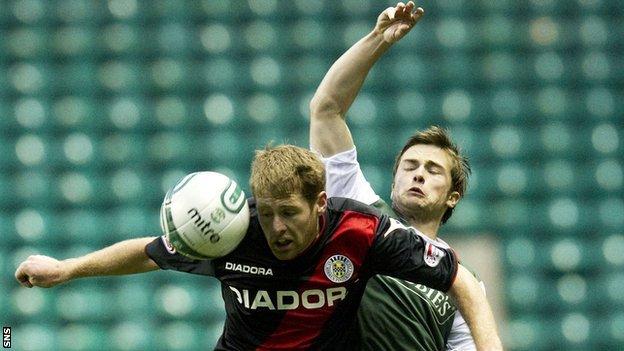 "We are hurting in terms of results but certainly our performances are up there," he said after

I thought we dug deep with everything that we had

"If we continue to play in that manner, I'm sure it will turn for us very soon.

"Results without quality is boring but quality without results is meaningless and we need to strike that balance."

St Mirren edged the first half at Easter Road and went ahead through a tremendous strike from Kenny McLean.

But Hibs hit back with a Leigh Griffiths double to move top of the Scottish Premier League while the Buddies stay in 11th spot.

St Mirren skipper Jim Goodwin was ordered off for a second booking just two minutes after the second Griffiths goal, leaving the visitors with a mountain to climb.

However, Lennon was happy with the application shown by his team when reduced to 10 men and had no comment to make on the dismissal.

"I've not seen it and I don't think the referee saw it," was all he would say. " It was the assistant that was waving for some kind of infringement.

"I've not said anything to him [Goodwin]."

Lennon, who gave midfielder Thomas Reilly his first SPL start, was convinced his team had matched their opponents and was left cursing the form of home goalkeeper Ben Williams.

"Hibs have made a vast improvement from last season and are in great form right now," he explained.

"We must credit Hibs with the win but it is a very difficult one to take.

"I thought the players showed great character and commitment and some very good football.

"And Hibs showed us respect because they had to change their formation halfway through the first half but that didn't phase us and we continued to play well and went ahead through a wonderful goal.

"Second half was pretty even until we got the sending off and Hibs had a wee spell on top.

"But I thought we dug deep with everything that we had after a difficult midweek game that went 120 minutes.

"The effort they put in with 10 men was incredible. I thought we looked more likely to score in the last 20 minutes and the Hibs keeper has had some fantastic saves."