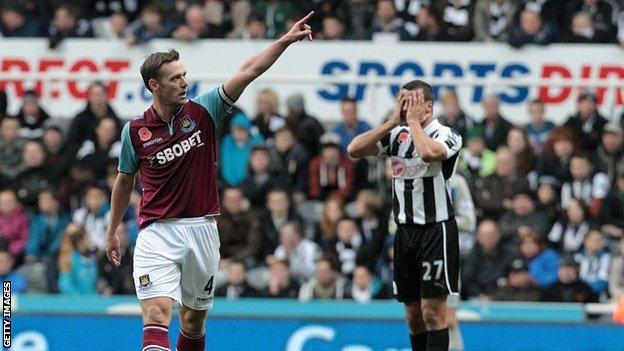 Kevin Nolan's first-half goal against his former club proved enough to see off a lacklustre Newcastle and propel West Ham into the top six.

Nolan ghosted in at the far post to turn in Joey O'Brien's mis-hit shot.

Newcastle were denied an equaliser when the officials ruled that goalkeeper Jussi Jaaskelainen had prevented Demba Ba's header from crossing the line.

Former Magpie Andy Carroll could have given West Ham breathing space but Tim Krul pulled off a fine one-handed save.

The home side's performance was so lacking in precision or passion that a 2-0 scoreline would hardly have flattered the upwardly mobile Hammers.

And the result will bring immense satisfaction to West Ham boss Sam Allardyce, who last week described his sacking by the Magpies after 24 games in 2008 as one of the lowest points in his career.

In their first season back in the Premier League, the Hammers were comfortable victors - despite losing three players to injury - and, in the tireless Nolan, had comfortably the best player on the pitch.

Indeed, Newcastle boss Alan Pardew's pre-match suggestion that he would welcome Nolan and Carroll back to St James' Park looked entirely justified in a blunt attacking display in which striker Papiss Cisse and his half-time replacement Shola Ameobi were particularly ineffective.

"It is West Ham's day, Sam Allardyce's day and Kevin Nolan's day. Big disappointment for Newcastle, but West Ham now have 18 points from 11 games back in the Premier League and that is a more than satisfactory return."

An opening 30 minutes low on quality and goalmouth action was characterised by misplaced passes and mistimed challenges.

Both sides were forced into an early change. First, Newcastle captain Jonas Gutierrez came off worst in a 50-50 tackle with Yossi Benayoun, then West Ham winger Matt Jarvis made way for Mali forward Modibo Maiga.

Carroll, whose every touch for Liverpool was booed when the sides met in April, received a noticeably less hostile reception from the fans who used to revere him.

In the context of a dire game, West Ham's opener was as unexpected as it was welcome for the neutral. A cross aimed at Carroll was headed as far as O'Brien on the right and the full-back's shot was turned in by Nolan.

The Hammers midfielder, who declined to perform his trademark chicken dance celebration against his old club, could have doubled the lead moments later but he sliced his left-footed shot wide from the edge of the box.

Newcastle's rally, which began before the break with half-chances for Hatem Ben Arfa and Yohan Cabaye, almost brought the equaliser within a minute of the restart.

Ba's powerful header bounced awkwardly in front of Jaaskelainen, who clawed the ball back from the goal-line. Newcastle's players were convinced the ball had crossed the line but inconclusive replays appeared to justify the officials' decision not to award a goal.

The Magpies continued to press forward but their play lacked subtlety in the final third.

Most of the home side's best chances came from corners, with half-time substitute Shola Ameobi wasting a free header from Cabaye's perfect delivery.

Newcastle's commitment to attack was always likely to leave gaps at the back and when Carroll capitalised on a defensive mix-up to exchange passes with Nolan, the former Geordie favourite found himself clean through on goal.

Carroll's slight hesitation, however, gave Krul time to set himself and pull off an excellent stop with his outstretched left hand.

The hosts' desperation for an equaliser saw Krul sent up for a late corner, but the Hammers held on for their first win at St James' Park since October 1998.

Newcastle boss Alan Pardew: "We are kicking ourselves. It was the West Ham performance we knew we were going to get but what we lacked was the verve and imagination to unlock them.

"We had eight or nine shots but none with any purpose or quality. Newcastle at home must score one, two, three or maybe 4 and we got none today.

"It's nothing to do with our European game - we made lots of changes and the team was fresh - but we didn't do ourselves justice in the first 30 minutes. We didn't come alive until they scored and that is not good enough.

"We've got a home game [against Swansea] next week and we're under pressure to produce a performance and win."