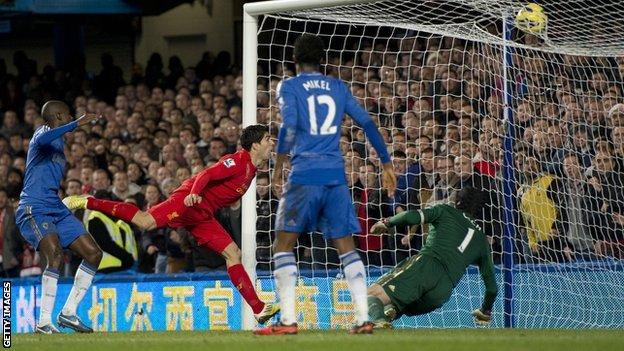 Captain John Terry headed the Blues an early lead but was then taken off on a stretcher after appearing to sustain a serious knee injury in an accidental first-half collision with Suarez.

Oscar and Juan Mata were guilty of missing clear chances to emphasise Chelsea's obvious superiority and, with 18 minutes remaining, Roberto Di Matteo's side paid the price when Suarez headed in his 11th goal of the season after Jamie Carragher flicked on Suso's corner.

Suarez was on target for the fourth successive away league game - further illustrating his vital importance to a Liverpool team that enjoys plenty of possession but, apart from the Uruguayan, carries too little threat.

For Chelsea, this was a disappointment that leaves them three points adrift of United and fearing that influential captain Terry could now be facing a lengthy spell on the sidelines.

Liverpool reverted to a five-man defensive system to counter Chelsea's attacking threat but were almost undone as early as the fifth minute when Oscar burst clear into the area only to send his effort off target with only keeper Brad Jones to beat.

"Liverpool have a very good point at Stamford Bridge. Their manager Brendan Rodgers will be delighted with that. Chelsea now have just two wins in 12 against Liverpool."

It set the tone for early Chelsea domination and Terry - back in Premier League action after a four-match suspension - took advantage of sloppy Liverpool defending to give them the lead after 20 minutes, escaping easily from Daniel Agger to flash a near-post header beyond Jones.

Fernando Torres had started in sprightly mood against his former club and forced a block out of Jones after an exchange with Eden Hazard, who then sent the rebound wide.

Having experienced the joy of scoring, Terry was taken off in agony before half-time after his coming together with Suarez.

Chelsea were still in the ascendancy as the break approached and Mata should have doubled their lead in stoppage time but shot high and wide with Jones once again the only obstacle.

Torres's endeavour demonstrated how desperate he was to hit the target and he almost got his wish with a header that was parried away by Jones.

Liverpool, thanks to Chelsea's profligacy, had been able to stay in range and were back in business in the 73rd minute thanks to Suarez, who headed in from virtually on the line.

Suddenly the visitors had some impetus. Suarez attempted to surprise Petr Cech with an audacious long-range effort then narrowly lost out to the keeper in a race for Jose Enrique's through ball.

Chelsea were also pressing and Branislav Ivanovic was not far away with a header as the game opened up in the closing phase.

The last chance fell to Enrique but he could not force his shot past Cech from an angle in the final seconds.

"We are disappointed with the goal. It was quite a standard corner ball into the box and we lost our man. But once again we showed the character in the team.

"In the first half we were too slow to get the ball forward. In the second half the players were fantastic. Their confidence and belief returned.

"All credit goes to the players. The equaliser was the least we deserved. We were probably unfortunate not to win it at the end."