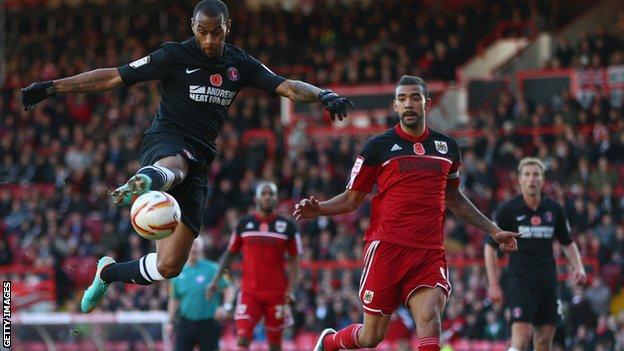 Bristol City lost for a club record-equalling seventh successive game and stayed bottom of the Championship thanks to a home defeat by Charlton.

The visitors went ahead in the 20th minute when Danny Haynes tapped home after Dale Stephens's long shot had hit both posts.

Charlton added a second 11 minutes into the second half as Michael Morrison slotted the ball into the net.

The Addicks climb to 16th while City are four points adrift of safety.

The home side went into the game looking to record a first league victory since 18 September and bring an end to an alarming run of form.

They had the first chance of the game when Albert Adomah's low cross found Martyn Woolford at the back post, but the midfielder's effort was blocked.

But after that early chance it was Charlton who generally looked the more likely to open the scoring and they did just that midway through the first half.

Stephens's shot from distance struck one post and then the other but the loose ball fell kindly for Haynes, who made no mistake from close range.

City had a great chance to equalise before half time when a cross found Sam Baldock unmarked inside the Charlton area, but he scuffed his shot straight at keeper Ben Hamer.

Haynes twice spurned good chances for Charlton after the break, while Stephens saw a 30-yard effort tipped over by City keeper Tom Heaton.

But they were not to be denied a second in the 56th minute when Morrison showed good instincts inside the box to fire home from eight yards.

City poured forward late on but a goal for Derek McInnes's side was not forthcoming as they failed to score for the third successive game.

"We are not worried about the future because we believe in the players.

"The club was in a worse position when we took over last season and we battled our way out of it. That will happen again.

"The powers that be at the club have indicated they are behind us and there is no harder working manager than Derek so I am convinced we will turn things around."

"It was the complete performance as far as we were concerned. It's the first time this season we have been able to say that.

"The midweek victory over Cardiff gave us confidence and today we defended solidly when we had to, as well as causing problems going forward.

"City were desperate for the points themselves so I am thrilled we competed so well. It is a result and a performance to build on."