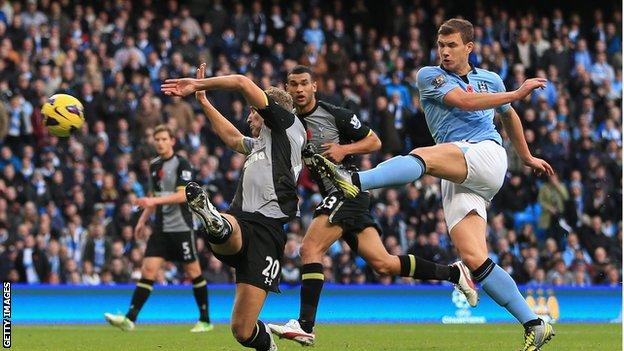 Edin Dzeko's late winner gave Manchester City a dramatic victory over Tottenham that keeps them in touch with leaders Manchester United and just two points off the top of the Premier League.

Dzeko, so often City's hero this season, came off the bench to snatch the three points with two minutes to go.

The Bosnia striker detests the term "super-sub", claiming it does not show him enough respect, but he again showed his worth as a late replacement after coming on for Carlos Tevez.

Dzeko exchanged passes with David Silva before slamming an unstoppable shot past Brad Friedel - his sixth league goal of the season and his fifth as a substitute.

In total, his goals have helped City earn nine vital points in their pursuit of their neighbours United and Chelsea.

For long spells against Spurs, City's unbeaten start to the season looked under threat, not because of poor defending, but because of an inability to take the numerous chances that came their way.

Dzeko apart, the champions are finding it much harder to find the net than they did when hitting 93 goals on the way to winning last season's title. Because of that, even sporadic failings at the back are potentially far more costly.

That was the case here, as Spurs soaked up some early pressure then scored with their first serious effort on goal. And, just as in midweek against Ajax, it was a set-piece that was City's undoing.

Caulker met Tom Huddlestone's whipped free-kick and Joe Hart was unable to keep his header out. The England keeper will argue his defence should have dealt with the delivery better but will also be angry with himself for allowing the ball to bounce over his line.

City's initial response was underwhelming. In fact, Spurs almost quickly doubled their lead as Emmanuel Adebayor, a nuisance throughout against his former club, teed up Huddlestone to skid a shot wide.

And, when the home side did come forward, referee Michael Oliver rejected two shouts for a penalty. The first was for a handball by William Gallas that would have been harsh; the second for a foul by Huddlestone on Pablo Zabaleta that looked far more clear cut.

Other than that, City struggled to make headway, with Spurs digging in. That justified Andre Villas-Boas's decision to play with only Emmanuel Adebayor up front, the Togo striker getting the nod over Jermain Defoe, despite the England man hitting a hat-trick on Thursday.

The pattern continued after the break, with City camped in the Tottenham half but unable to find a way through the visitors. Aguero stumbled as he ran clear from Toure's lobbed pass, but that was the closest they came to a meaningful chance.

Then came Mancini's first change after 56 minutes, with Maicon on for Matija Nastasic, and a change of system that allowed the Brazilian and Aleksandar Kolarov to raid forward as wing-backs.

That stretched the previously solid-looking Spurs defence, and an equaliser soon followed.

City were fortunate that the ball found its way to Aguero on the right of the box, but there was nothing lucky about his finish, with the Argentine turning inside Caulker before slotting past Friedel.

Anxiety among the home fans was suddenly replaced by belief and expectation, none more so than when Dzeko made his entrance with 17 minutes to go.

Chance after chance followed for Mancini's men, with a Dzeko effort being deflected into the side netting, Silva rolling a shot wide, Friedel denying Dzeko and Aguero also testing the Tottenham keeper.

Spurs did threaten on the break when Gareth Bale found space to smash in a shot that Hart had to beat away, but otherwise it was one-way traffic.

And Dzeko delivered the goods again with two minutes to go when he fed Silva then ran into the box to meet the return pass, swivelling to fizz an unstoppable shot past Friedel.