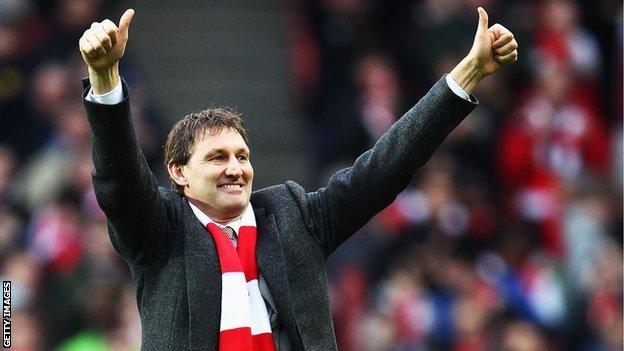 Ex-Arsenal captain Tony Adams says the current team will struggle to finish in the top four because there is no belief within manager Arsene Wenger's squad.

"If Wenger gets them into the top four he's done brilliantly," Adams said.

The 46-year-old was also critical of the Gunners' failure to bind leading players to long-term deals.

Theo Walcott's current contract ends next summer and the England forward, who rejected a five-year deal worth £75,000 a week in August, will be free to talk to other clubs from January and free to leave the club in the summer as he will be over 24 by then.

Right-back Bacary Sanga has already questioned the club's transfer policy of allowing the likes of Robin van Persie, a £24m summer signing for Manchester United, and Alexandre Song to leave in the summer, following the departures of Cesc Fabregas, Samir Nasri and Gael Clichy in 2011.

"I never got anywhere near the last year of my contract," added Adams.

"You don't let them go into their last year and run their contract down.

"It's about winning, and how do you win? You have the best players, and if you keep selling your best players you're not going to win.

"If you sell your best players you're not going to challenge for titles.

"There's been so many players who have moved on and are doing great jobs for other teams, the list is endless."

Wenger said this week that he wanted Walcott's future resolved by Christmas, but the player is reluctant to discuss a new deal unless he regains a regular starting spot.

The Southampton academy product was a second-half substitute as Manchester United comfortably beat Arsenal 2-1 on Saturday, inflicting the Londoners' third Premier League defeat of the season.

Adams, who served the club for 22 years as a player, described Walcott's midweek hat-trick against Reading in the Capital One Cup as "brilliant" and believes the 23-year-old should get the opportunity to lead the attack.

"The big one at the moment is Theo. You're getting to the stage where there's a big urgency," said Adams of Walcott's contract situation. "I'd like to see [Walcott up front]."