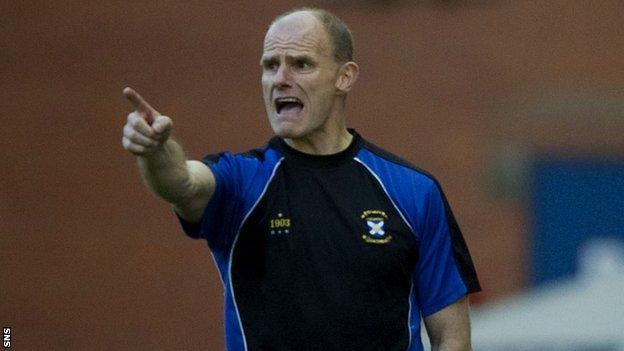 Gordon Durie has resigned as manager of East Fife due to health problems.

The former Fifers player, who rejoined the club as assistant manager two years ago, took on the manager's role after John Robertson's departure in March.

However, illness meant he had to take a break from his duties and Gordon Chisholm has been in charge of the first team in recent weeks.

"I would like to thank all the fans for their messages of support," the 46-year-old told the club website.

"I would also like to take this opportunity to wish East Fife every success for the future.

"Due to on-going health problems and the uncertainty that has arisen during my absence and with the best interests of the club in mind I have decided to resign as manager of East Fife FC in order to allow the club to move forward.

"It has been a privilege to have had the opportunity to manage the club where I started my career."

After a three-year spell at East Fife in the early 1980s, Durie went on to play for Hibernian, Chelsea, Tottenham, Rangers and Hearts.

"The club would like to thank Gordon for all his work both as manager and as assistant manager," said East Fife in a statement.

"It has been deeply unfortunate that illness has prevented him from carrying out his duties in the way that he and we would have wished.

"We hope his health recovers soon and look forward to his visiting Bayview in the future where he will always be welcome."