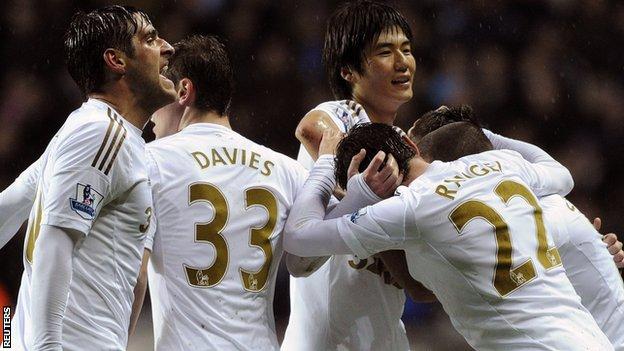 The Swans followed Wednesday's Capital One Cup win over Liverpool with a Premier League draw with Chelsea thanks to Pablo Hernandez's late equaliser.

"The confidence, the togetherness - I think we've really come together as a team this week," said Williams, 28.

"When a team comes from behind in games you can really see the team spirit."

Laudrup made a dream start to his managerial reign at Swansea with a 5-0 win at Queens Park Rangers and a 3-0 home win over West Ham United.

But three league defeats in a row in September halted the early momentum, leading to an admission of concern by Williams over the team's development.

Eight new signings were recruited by Laudrup as he set about his task of emulating Swansea's fine Premier League debut under Brendan Rodgers, who left to join Liverpool.

Williams believes recent results, including a narrow defeat to champions Manchester City, have shown the new-look team is beginning to gel.

"It's been a good week," said Williams, who looked back to his best against Chelsea after some uncharacteristic mistakes earlier in the season.

"We didn't get anything at Man City but we performed well. We beat Liverpool in the cup and then we've got a draw against the European champions.

"We never stopped, we consistently kept playing our game and we knew our chance would come. When it came it was a great finish from Pablo to take it."

All eight of Laudrup's new additions are experiencing the Premier League for the first time.

Six of them featured against Chelsea, with two ocombining two minutes from time to grab a draw as Itay Shechter set up Hernandez.

Laudrup believes all are now getting to grips with the league's demands, but Williams says all the players, particularly those who thrived under Rodgers, are also adapting to the new manager's methods.

"We obviously know the gaffer a bit better and he knows us, and also the new signings that have come in.

"We're working really hard at the minute and you can see the results out on the pitch."