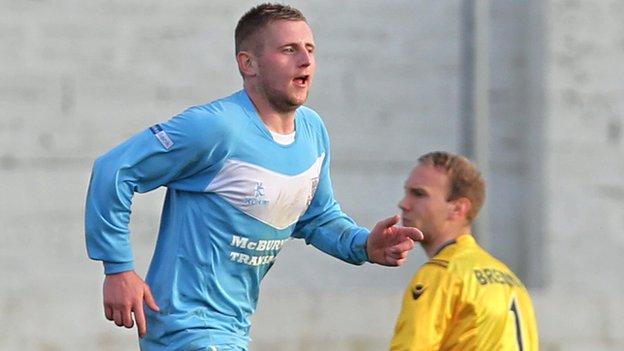 Linfield, who last won the cup in 2008, lost 2-0 at Ballymena on the first day of the Premiership campaign.

The teams will also meet in the Premiership and County Antrim Shield final later this month.

"There is no bigger challenge than playing Linfield," said Ballymena manager Glenn Ferguson.

"The lads are really up for it and confidence is high after Friday's win at Dungannon."

Holders Crusaders will be expected to reach the semi-finals at the expense of the Premiership's bottom club Lisburn Distillery.

But manager Stephen Baxter is wary as the Crues have suffered recent knock-outs at the hands of the Whites.

"Distillery are a team we have played in a lot of cup competitions in recent years and we never seem to come out of the right side of these meetings," said Baxter.

"I remember them coming here and we were three down in half an hour.

"So we need to be sure we go about our business well and play our football.

"We will probably bring in some fresh legs. There is a lot of competition for shirts at the club at the moment."

Premiership leaders Cliftonville are at home to 2009 League Cup winners Portadown while Glenavon take on Glentoran at Mourneview Park.