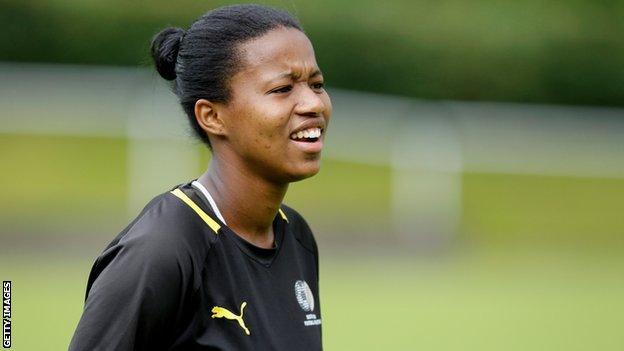 Defending champions Nigeria and hosts Equatorial Guinea both qualified for the semi-finals of the African Women's Championship with perfect records.

The two teams who represented Africa at the London Olympics this year, South Africa and Cameroon, join them in the last four.

The final Group B matches were played on Sunday, with Nigeria beating Ivory Coast 3-1 while Cameroon were held to a goalless draw by Ethiopia.

Earlier in the tournament, Nigeria gained a measure of revenge over Cameroon, who beat the Super Falcons to qualify for the Olympics, with a 2-1 win in the group opener.

Perpetua Nkwocha scored a late winner in that game, and she also scored the final goal in the 3-0 win over Ethiopia.

Cameroon recovered from their last-gasp loss to Nigeria to record a comfortable 4-1 win over Ivory Coast in their second match.

A hat-trick from Andisiwe Mgcoyi (pictured) helped South Africa seal their place in the last four as they beat DR Congo 4-1 in their final Group A game on Saturday.

South Africa, who played at 2012 Olympics in London earlier this year, lost their opener 1-0 to the hosts.

They bounced back to beat Senegal 1-0 in their second game with Mgcoyi getting the only goal of the game.

Portia Modise celebrated her 100th cap against Senegal but has been unable to add to her tally of 72 goals so far.

Equatorial Guinea are the only team other than Nigeria to have been African Women's Champions, when they lifted the title in 2008 - and that was also on home soil.

The hosts scored 12 unanswered goals in their group games with a 1-0 win over South Africa followed by a 6-0 thrashing of DR Congo and 5-0 win over Senegal.

Genoveva Anonman with four goals and Jade Boho with three are the top scorers for Equatorial Guinea after the group stages.