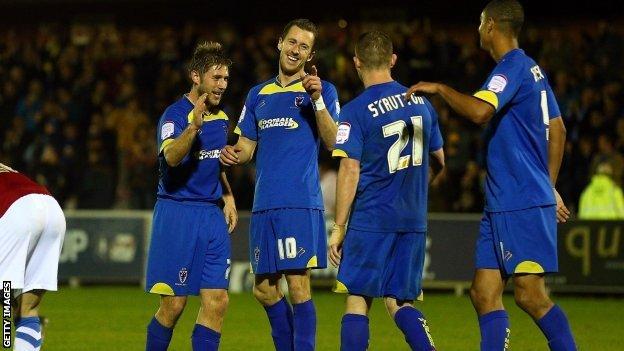 MK Dons will meet AFC Wimbledon, the club set up by the Dons' former supporters, in the most eye-catching tie of the FA Cup second round.

They will face each other for the first time since AFC Wimbledon was formed in 2002 after the Dons beat Cambridge City 6-1 in Tuesday's first-round replay.

League Two side AFC Wimbledon earned their berth with a 4-3 win over York.

Hastings United, the lowest-ranked side through, face an away trip to fellow non-league side Harrogate Town.

Port Vale manager Micky Adams will take his current team to play one of his former sides, Sheffield United, while the longest away journey in round two will be made by Bournemouth, who travel to League One rivals Carlisle for the second time in five weeks.

Second-round ties will be played on the weekend of 1 and 2 December, while teams from the Premier League and Championship enter the competition in the third round.