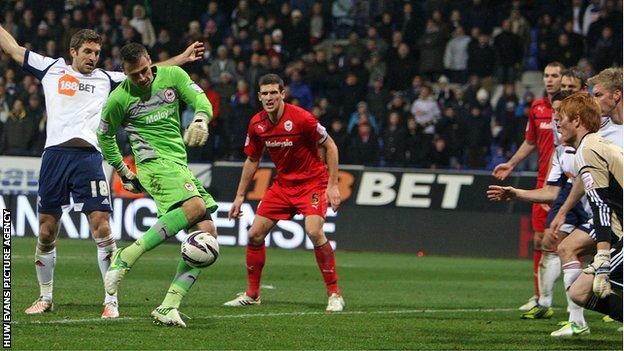 Goalkeeper David Marshall says Cardiff City are "too good" not to replicate their home form on the road.

The Championship leaders lost away for the third time in four attempts on Saturday by failing to protect a one-goal lead at Bolton Wanderers.

Seven home games have yielded seven wins and Marshall is confident they have the class to end their away woe.

"We'll just keep working hard and eventually it will turn. We are too good," said Scotsman Marshall.

"We have a lot of injuries at the moment but we're too good not to win games away from home in this league.

"A couple of games here and there have been poor, especially Bristol City away, but apart from that we haven't been poor away from home.

"We just need the results and a bit of luck to go in our favour."

Marshall, 27, almost snatched a point for Cardiff at the Reebok Stadium when he ventured up field for a last-minute corner.

He found space to control the ball on the six-yard line but his shot on the turn was deflected over the bar after hitting goalkeeper Adam Bogdan in the face.

"It was crazy the last couple of minutes," he said. "I never usually go up for corners because I think we've got enough up there, but when they went down to 10 men I thought they'd leave nobody up and I took a chance.

"It's skipped off his [Bogdan's] face or head. So I'm gutted.

"He put his body on the line in the last couple of minutes but it's disappointing to lose the game."

Craig Noone gave Cardiff the lead at the end of an uneventful first half, but two goals in five minutes after the break ensured Dougie Freedman won his first game in charge of Bolton.

Marshall agreed with his manager's view that David Ngog "dived" to win the penalty that saw Bolton draw level, and stressed Cardiff were denied a legitimate penalty of their own in stoppage time when captain Mark Hudson fell under Stephen Warnock's challenge.

"He [Hudson] said it was a stonewall penalty," said Marshall. "Everybody in the ground thought it was a penalty.

"The referee had a good view and the linesman had a better view because there was no-one in the way.

"But there are no excuses, we've conceded two goals and lost so we've just got to get on with it."

The trip to Bolton was the first of four away fixtures in November, the second of which sees Cardiff face Charlton on Tuesday.

Two home games follow against Hull and Middlesbrough, who are below the Bluebirds only on goal difference.

"The next three games are massive," added Marshall.

"Charlton are not really up there but it's an away game. Middlesbrough and Hull are going to be two teams up there at the end.

"Everybody in the squad is going to be needed over the next three games. We'll know how good we are and where we're sitting after those games."