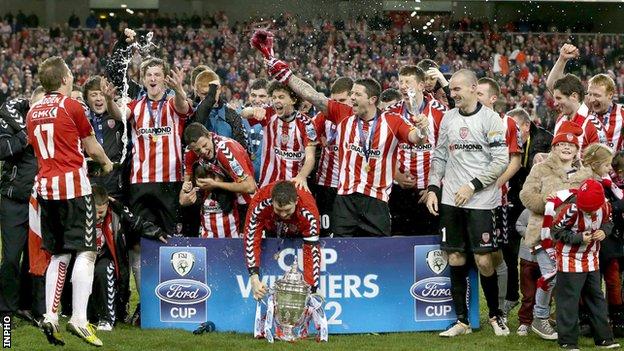 St Pat's took the lead through Sean O'Connor's direct free-kick in the 53rd minute but Derry were quickly level through Stewart Greacen's header.

Rory Patterson edged Derry ahead with a penalty but Christy Fagan snatched a late equaliser for St Pat's.

Sub Patterson scored the winner in the first period of extra-time as Derry won the cup for the first time since 2006.

Former Coleraine and Plymouth striker Patterson admitted he felt he should have started the game as he had battled back to fitness.

"I was fuming I did not start because I feel I always show up for big games," said Patterson.

"For the last few months I have done everything I could to get fit for the final.

"But it has all worked out. St Pat's are a fantastic side and put on a great show but I think we had the momentum going into the final."

Derry boss Declan Devine admitted Patterson had been unlucky to be on the bench.

"David McDaid has scored 17 goals this season and deserved to start and, with the formation, it meant Rory was unlucky.

"But, look, I brought Rory to this club. He was one of my first signings and I love him to bits."

Derry had to lift themselves for the extra-time success after St Pat's had grabbed a late equaliser in normal time.

The second half was a scintillating affair after a rather tame first half.

O'Connor made the breakthrough with a free-kick which curled over Derry's defensive well to leave keeper Gerard Doherty well beaten.

Central defender Greacen rose to head in the instant response after Barry McNamee had sent in a free from deep on the right wing.

Derry then went ahead with Paterson's 69th-minute penalty which St Pat's will feel was harshly awarded for keeper Brendan Clarke's push on Stephen McLaughlin.

However, the Dublin club, seeking their first cup triumph since 1961, grabbed a lifeline as Christy Fagan turned in a close-range equaliser in the 88th minute.

The game seemed to be tilting the way of the Dublin side but Patterson pounced on a defensive mistake for the decisive strike in extra-time.