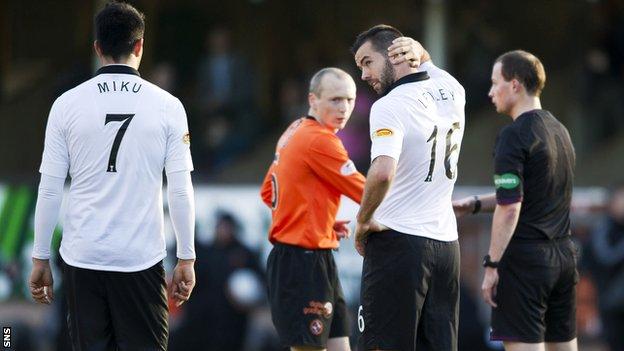 Manager Neil Lennon was aggrieved to drop points at Tannadice as

"I thought we were brilliant today and we didn't get what we deserved, which was the three points," Lennon said after United grabbed two late goals.

"We had to work really hard to get our two goals but I felt we were dominant.

"We should have seen it out but Dundee United got a couple of breaks. To come away with a point is frustrating but I was pleased with the performance."

Celtic were on top for long spells before the interval, with Thomas Rogne and Scott Brown both heading wide from close range.

The second half was a much more even contest but the visitors were on course for victory when Tony Watt smashed in a shot on 80 minutes, adding to Miku's excellent first goal for the club since arriving on loan from Getafe.

Emilio Izaguirre and Thomas Rogne both limped out of the action and Lennon said both defenders were now injury doubts for Wednesday's meeting with Barcelona in the Champions League.

"A couple of injuries sort of disrupted the flow but Miku came on and got his goal, which we are very pleased about and young Tony has got a great goal."

Gary Mackay-Steven took advantage of some indecisive defending to reduce the deficit with a composed finish on 89 minutes.

And United's leveller came in stoppage-time when a cross from Barry Douglas clipped the head of defender Efe Ambrose and the ball flew into net for an own goal.

"We let a ball bounce in our box from a long throw-in and that can always lead to trouble and we didn't stop a cross for the second one," explained Lennon on BBC Radio Scotland.

"We slacked off a little bit.

"When Dundee United got their first goal they flashed one across the face just after and that should have been the warning sign to say 'let's just stick it in the corner' and we didn't do that for some reason.

"That's not good enough as far as I'm concerned but we have played well and should really have seen the game out."

The draw was enough for Celtic to return to the top of the Scottish Premier League on goal difference from Hibernian, with Inverness, Aberdeen and St Johstone all three points off the summit.

Despite the competitive look of the table, Lennon believes his side will pull away from the chasing pack over the course of the season.

"I've got a good team here and we are top of the league with a game in hand," he said.

"From a neutral point of view it might seem that way [a close contest] but I think, once we find a level of consistency, it will be difficult for any team in the SPL to stay with us."