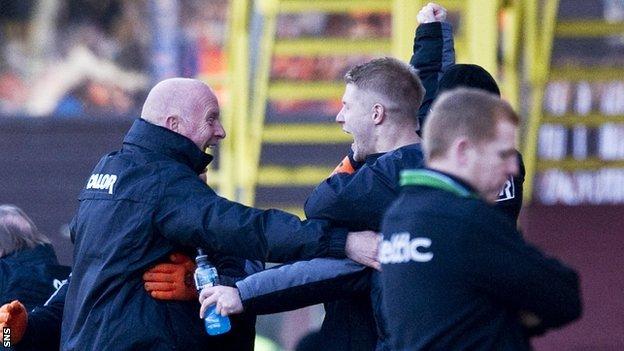 United scored in the final minute of regulation time through Gary Mackay-Steven and then in injury time with an Efe Ambrose own goal.

"I think we were well worth that," the Tannadice boss told BBC Scotland.

"Great credit goes to our players because they showed the character that I know they've got."

Second-half strikes by Miku and Tony Watt put Celtic in command, with the latter stemming from a mistake by goalkeeper Radoslaw Cierzniak.

"I put Gary Mackay-Steven on to try and go and win the game because I thought we were the better team," added Houston.

"It was disappointing that we made a positive substitution and all of a sudden we found ourselves one down. And then they get a second one through Rado's bad kick.

"I don't blame him for that because he's kept us in the game in recent weeks.

"But we keep at it. If you keep putting balls in the box I always say it doesn't need to be your own players that score goals.

"We can be an exciting side again as long as we make sure that we lock the door at the back and win the games.

"If we get performances like that we won't be too far away from having another decent season. Results like this sometimes can just kick-start your season."

United remain 10th in the Scottish Premier League but have two games in hand, including one against leaders Celtic, and only five points stand between Houston's side and third-place Inverness.

"Celtic are the quality side for the division," added Houston.

"The rest of us is very much of a muchness. I don't think there's any outstanding team who will finish well clear of the third team, whoever does finish second.