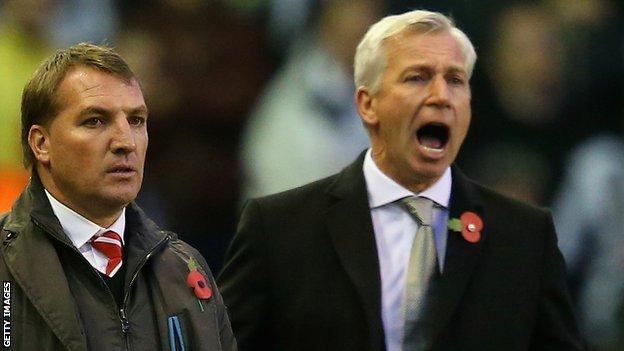 Newcastle manager Alan Pardew lamented his side's misfortune after losing three players to injury and having Fabricio Coloccini sent off in the 1-1 draw against Liverpool at Anfield.

James Perch came off in the first half, Demba Ba suffered a calf injury and Yohan Cabaye was also replaced.

Pardew said: "We were so unlucky.

"We had three injuries and our captain sent off. It was a tough day but it's a decent result. We should have won going in at 1-0, but I'll take the point."

Newcastle took the lead through Cabaye's brilliant strike late in the first half.

Luis Suarez levelled with a composed finish after the break, but although the home side poured forward and Coloccini was dismissed with six minutes remaining for a dangerous challenge on Suarez, the patched-up Magpies held out.

Pardew added: "I was surprised he got a straight red card. I don't think he touched Suarez but it looks bad.

"I will have to analyse it a little bit more. I don't think he would intentionally do that, but I will have to look at it. I think he [referee Anthony Taylor] got the call from his linesman and he followed that."

Pardew was happy with a point but felt they should have really had all three.

"I thought we would win the game," Pardew said.

"When you come away to big clubs like Liverpool, you have to defend well and we did. There was a lot of pressure but we kept threatening on the break. The goal was the changing point for Liverpool. We gave away possession in midfield and were a little bit open. A quick ball has exploited us.

"They will always have a spell but we defended well and were well set for the victory - but we gave possession away when we weren't quite set and got a really bad goal against us."