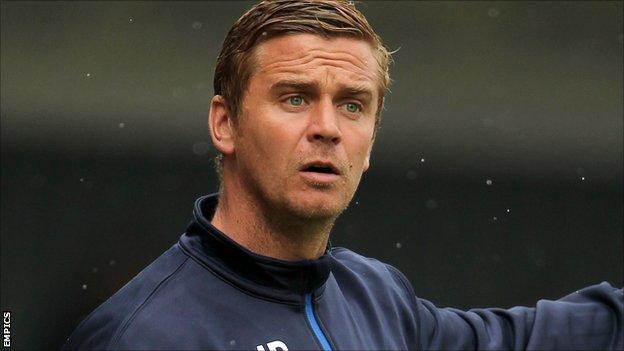 It was the third time this season in which Pools had conceded five or more goals in a single game.

"People go into their shells and don't defend," Barron told BBC Tees. "Even if it's 3-0 you have to keep defending.

"Too many times it ends up four, five or six and it's an embarrassment to the club and the fans who have to watch."

Barron continued: "You maybe get away with it every six months, but we have them too regularly."

Defeat extended the club's winless run to 14 games, with the solitary success against fellow League One strugglers Scunthorpe recorded on 1 September.

Meanwhile, Pools were backed by a vocal travelling support at the Proact Stadium, but fans' optimism was quickly replaced by frustration as the goals went in.

"I'm surprised it took them that long to turn," Barron said.

"I thought they were terrific, encouraging and tried to get behind the team, but they need something coming back for them.

"They came in good numbers and before the game it was great, but there's not a lot to cheer when you see goals going in left, right and centre against a team in the division below us.

"Now we're out of the FA Cup, what more can they do apart from criticise?"