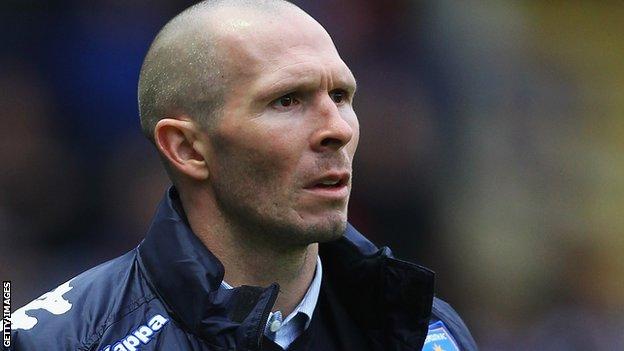 It is thought that Appleton's move now hinges on the two clubs agreeing compensation, with the other candidate not currently in work.

Tangerines chairman Karl Oyston says that the club are closing in on a swift replacement for Ian Holloway, who moved to Crystal Palace on Saturday.

Appleton, 36, has previously been linked with Bolton and Burnley.

The other contender is understood to be one of Paul Ince, Owen Coyle and Phil Brown.

Coyle, who was sacked by Bolton last month, has also been linked with the vacancy at Bloomfield Road after guiding Burnley to promotion to the Premier League, as has Ince, who has been out of work since leaving Notts County.

Brown's last job was with another Lancashire club, Preston, but he was sacked by the Lilywhites last December.

Assistant manager Steve Thompson, who has been in caretaker charge, had expressed an interest in the job.

Appleton moved to Fratton Park on a three-and-a-half-year deal last November from his role as assistant head coach at West Bromwich Albion, but his time has been crippled by financial problems and he has been forced to completely rebuild his squad.

The former Manchester United trainee was unable to prevent the club being relegated from the Championship earlier this year and they currently lie 15th in League One, seven points off the play-off places.

He initially joined West Brom as a player in 2001 and also had spells at Lincoln, Grimsby and Preston but was forced to retire from playing because of a knee injury in 2003.