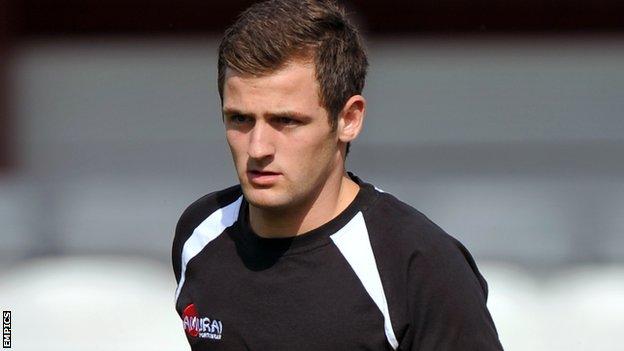 Accrington midfielder Will Hatfield has described scoring all four of his side's goals in the 4-1 FA Cup win over AFC Fylde as like a dream.

The 21-year-old former Leeds trainee had not scored in his first 13 games of the season.

But he scored twice in each half to put away the Northern Premier League side.

To get four in the FA Cup, no-one can ever take that away from him

"To come away with a 4-1 win and for me to score all four goals, it's a dream really. I won't forget today," he told BBC Radio Lancashire.

"It's my first professional hat-trick and to get the four, it's a day I'll remember for a long time."

Hatfield moved to the Crown Ground initially on loan from Leeds but made the moved permanent last February and signed a one-year extension in the summer.

Speaking about Hatfield, manager Leam Richardson, who was taking charge of his first game since being appointed full-time, said: "He's got that kind of habit and that's why I brought him to the club.

"He showed last year how much of a goalscorer he is, so to get four in the FA Cup - no-one can ever take that away from him."

Accrington have been drawn against fellow League Two side Oxford United in the second round of the FA Cup.