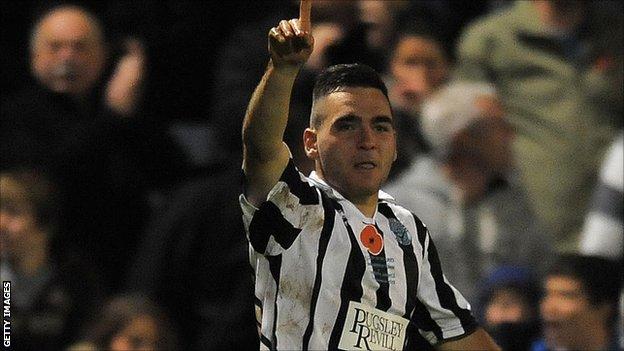 Gosling, who was released by Plymouth when he was 16, and is on loan from their rivals Exeter City, fired in from 10 yards to seal a famous 1-0 win.

The goal set up a second-round trip to either Luton or Nuneaton Town.

"It is the best footballing moment of my career without doubt," Gosling told BBC Radio Solent.

The midfielder may not be at the club for the second-round tie on 1 December but says that goal will stay with him forever.

"I had my loan extended once, whatever happens now I've had a terrific time at Dorchester and hopefully this can kick-start my career."

Dorchester manager Phil Simkin paid tribute to his side and said their victory was thoroughly deserved.

Simkin also believes they now have a real chance of making the third round, after Sunday's draw pitted them against a non-league side, either Luton or Nuneaton.

"The boys were terrific and what I was really pleased about was the fact we passed the ball so well," said Simkin.

"It wasn't a fluke, and yes the referee gave us a bit of a leg up with the sending off but in the rules of the game he didn't really have a choice but I can understand why Carl [Plymouth boss Carl Fletcher] would be upset. I would. He called it as he saw it.

"I thought we played very well and deserved to win the match. We stuck to our game plan, got the opening goal and I thought we were unlucky not to get a second.

"It means everything to this football club and everyone who works behind the scenes."

He added on the draw: "Why shouldn't we go there with confidence?

"There will be a big gate at Luton if it's them. It's incredible, this is a day the younger players will never forget they must soak it up because it may never happen again for them."