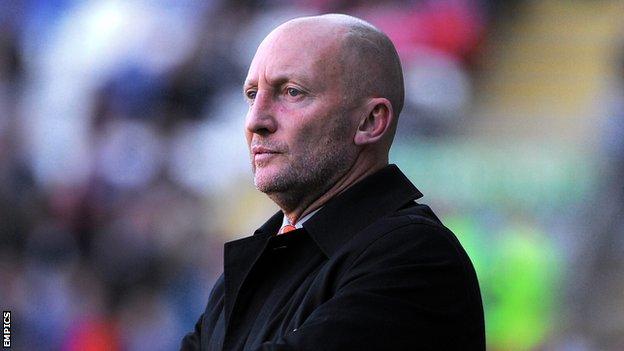 Ian Holloway says his desire for a new challenge was the reason for becoming Crystal Palace's new manager.

The 49-year-old left Blackpool to take charge at Selhurst Park on a four-and-a-half-year deal on Saturday.

"They [Blackpool] have been magnificent to me and I just feel ready for a change," he told BBC Radio 5 live.

"It's a new place, a new challenge and everybody in life needs that sometimes. It's a personal choice for me to have a fresh, new outlook on things."

Holloway spent three years with Blackpool, winning promotion to the Premier League via the play-offs in May 2010 although they were relegated the following season.

The former Bristol Rovers, QPR, Plymouth and Leicester boss came close to securing a return to the top flight last season but his side were beaten in the play-off final by West Ham.

"I absolutely loved every minute of being there and I don't want it to fade away. I'm not saying it will but my own enthusiasm for it was getting harder and harder to keep that as high as it was," he added.

"My chairman [Karl Oyston] was an absolute gentleman and we got on so well. I just need a new challenge.

"With this opportunity now and to be only two hours away from my family, we could not turn it down."

Holloway says the vision of the club's owners convinced him to take over from Dougie Freedman, who joined Bolton Wanderers last month.

"I've bought into the energy the four owners have shown me; in the youth set-up they've already got, in the team they are investing in and the way they want to play football," he continued.

"Their enthusiasm with what they want to do for their football club is quite exceptional.

"It was the most wonderful trip I've ever been on and to me it will always take some beating."

Holloway will take charge of the Eagles for the first time on Tuesday, when he will be in the dugout for their Championship match at home to Ipswich Town.

He is impressed with the quality of the squad he has at his disposal after watching the 2-0 weekend victory over Blackburn Rovers, which moved Palace up to third in the table.

"The team I have inherited... goodness gracious me," Holloway said.

"They've got balance, dogged determination and are on a really good run.

"Some of the things the wide men can do is just awesome and they've got a big man in Glenn Murray who gets hold of it, is a handful and brings everyone into it.

"I am taking over from some fantastic people. Dougie's decided to leave, Lennie [Lawrence] has gone and I am the lucky beneficiary.

"I could see the work they have done in that team, in that atmosphere and in that squad and their professionalism shows.

"Now my challenge is to try and beat what I did at Blackpool here at Crystal Palace."