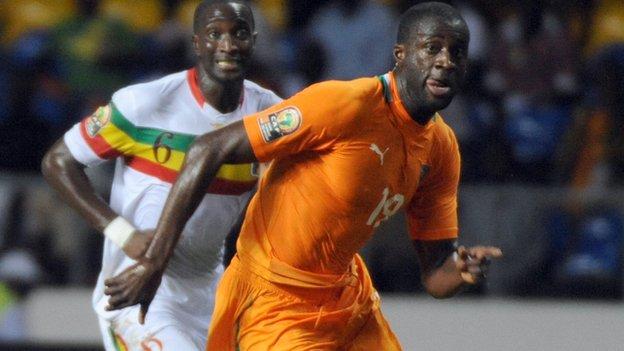 The shortlist for the African Player of the Year has been revealed by the Confederation of African Football.

Last year's winner Yaya Toure heads the list of 10 in contention, cut down from an original list of 34 players.

The Ivory Coast and Manchester City midfielder is one of four England-based players up for the 2012 award.

Also on the list are two others who played football in England during 2012.

They are former Arsenal midfielder Alexandre Song, who now plays for Barcelona, and ex-Chelsea striker Didier Drogba, who is now at Chinese club Shanghai Shenhua.

Chris Katongo is the only member of the African Nations Cup-winning Zambia squad that made the list.

Morocco's Younes Belhanda has been recognised for his contribution to French side Montpellier's Ligue 1 success earlier this year.

The candidates for the award will be reduced to a list of three in the last week of November.

Caf also announced the shortlist of five nominees for the Africa-based Player of the Year award.

Among them is Egyptian midfielder Mohamed Aboutrika, who played in Al Ahly's 1-1 draw with Esperance in the African Champions League final first leg on Sunday.

The awards, which also include Coach of the Year and Club of the Year will be announced at a ceremony on 20 December in the Banquet Hall, State House in the Ghanaian capital Accra.

Nominees for African Player of the Year:

Nominees for Africa-based Player of the Year