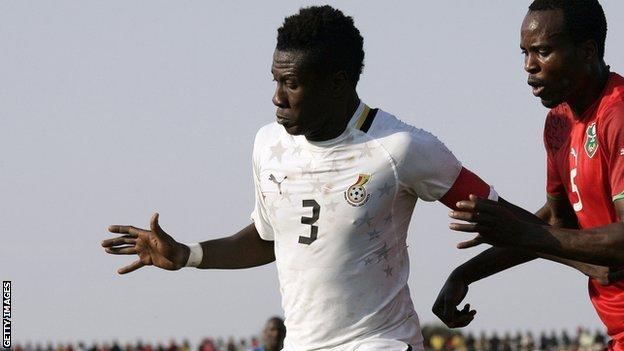 Ghana's Asamoah Gyan has been given the option to withdraw from the Black Stars' squad to face Cape Verde in a friendly next week.

This follows the death of his mother in a car crash in Accra on Tuesday.

The striker had been set to lead the team of fringe players in Tuesday's game against the Blue Sharks in Portugal.

The Ghana Football Association told the BBC that Gyan will play for his club Al Ain in a UAE league game on Thursday before flying to Accra the following day.

He is yet to decide whether to play for Ghana next week.

Gyan was named in Kwesi Appiah's squad alongside the likes of Inter Milan teenager Joseph Duncan on Tuesday.

The 19-year-old Duncan, who has played four minutes of senior football, made his debut for Inter Milan against Pescara in August.

Appiah has rested several regulars as he looks at possible back-up choices ahead of the 2013 Africa Cup of Nations.

Both sides are using the game to prepare for January's Nations Cup finals in South Africa.

"It is part of our intensive preparations for the 2013 Africa Cup of Nations," Ghana FA president Kwesi Nyantaki told Ghanafa.org.

"Cape Verde showed the strength of their side by edging past giants Cameroon to qualify for the Nations Cup and this shows that they are a tough side.

"In many ways they are similar to our group opponents at the Africa Cup of Nations and we are happy that they have agreed to play us.

"We want to leave no stone unturned with adequate preparation for Africa's flagship football event to ensure success for the Black Stars."

The Black Stars have been drawn in Group B to play Democratic Republic of Congo, Mali and Niger - they kick off their campaign against DR Congo on 20 January.

Cape Verde will play the opening match of the tournament against hosts South Africa on 19 January, and will also face Morocco and Algeria in Group A.