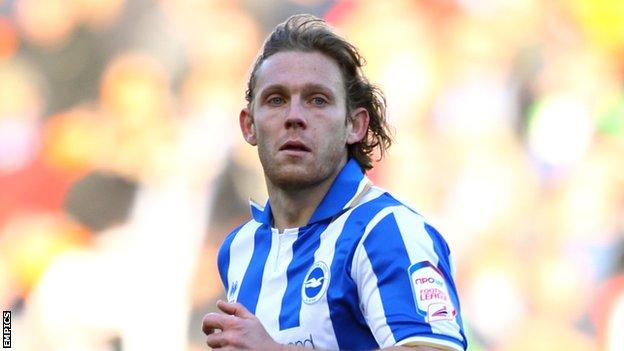 Brighton and Hove Albion striker Craig Mackail-Smith says their recent results do not reflect their performances.

The Seagulls are currently on a run of seven games without a win.

He told BBC Sussex: "The boys are just disappointed because we are putting in some great performances but not getting what we deserve from it.

"In this league that's the way it goes. We've just got to keep high standards, keep trying to create chances and hopefully we can get a win."

Mackail-Smith hit a brace as Albion drew 2-2 at home to Leeds United on Friday, but the 28-year-old missed a second half penalty which could have sealed that elusive victory.

"It would have been nice to get a hat-trick in front of the home fans and it was for three points," he added.

I feel confident in myself to normally beat the keeper nine times out of ten. That one was his

"It's hard to take as it's 12 yards and you versus the keeper. I feel confident in myself to normally beat them nine times out of ten. That one was his."

The Scotland international scored 99 goals in 212 appearances during his four-and-a-half year spell with the Posh.

"They've done really well over the last three or four weeks so it's not going to be easy," Mackail-Smith said.

"I just look at it as another game. I had great memories and great times there.

"I will shake the boys' hands before, but as soon as the whistle goes it's down to business.

"If we can perform [to the level we did against Leeds] I think we will get the three points we deserve."