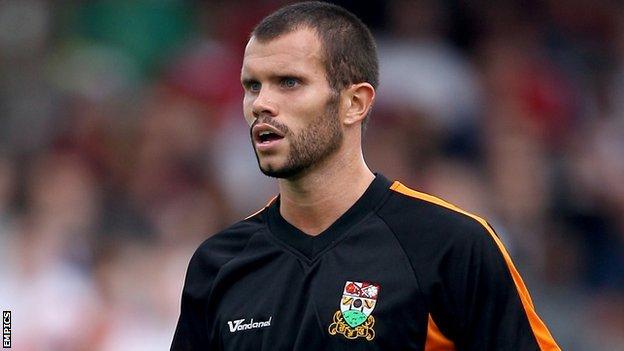 Gillingham manager Martin Allen has paid tribute to Adam Birchall's commitment after the striker scored his first goal for the club.

The 27-year-old, who missed all of last season with a cruciate ligament injury, struck in Saturday's 4-0 win over Scunthorpe in the FA Cup.

"Birchall has been out a long time with that knee," Allen told BBC Radio Kent.

"I think there have been times he has wondered and worried if he'd ever play proper football again."

Birchall joined the Gills from Dover Athletic last summer but suffered the injury in a pre-season game.

He made his debut for the League Two leaders in their League Cup tie against Bristol City in August and made a further two appearances before joining non-league Dartford on a one-month loan deal in September.

"To see him get that goal has been the icing on 13 or 14 months of hard work, worry and anxiety," Allen continued.

"All the players and staff gave him a standing ovation in the dressing room for his dedication and his work.

"He did really well out at Dartford and we watched him all the time.

"He is brilliant in training. The stuff he does, you want to see it.

"He's always on the turn, he's energetic and has got a great smile every day you come into work.

"He's back and we've got another player now."