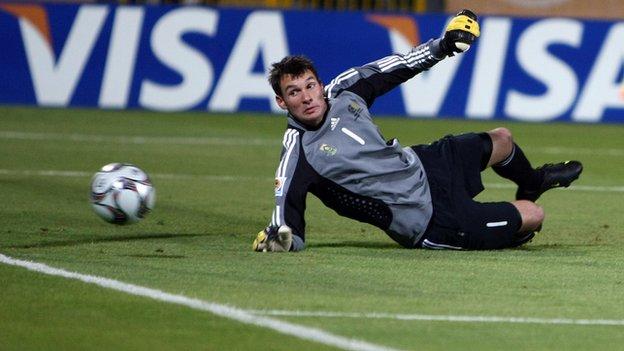 South Africa have recalled Belgium-based pair Darren Keet and Anele Ngcongca for the friendly with African champions Zambia on 14 November.

Keet is one of only two keepers in the squad, while Genk defender Ngcongca has been selected for the first time under coach Gordon Igesund.

England-based Kagisho Dikgacoi and Dean Furman are both in the 24-man squad.

We've got no superstars in our team but nothing is impossible

The game, which will be played at the FNB Stadium in Johannesburg, will likely be used by both coaches as an important preparation for next year's Africa Cup of Nations which takes place in South Africa.

The 2013 tournament will be held between 19 January and 10 February.

Igesund said: "This is probably the last chance for a lot of players, especially the overseas-based players, to impress.

The 23-year-old Keet, who is currently with Belgian club KV Kortrijk, was pleased at his reselection.

"Really happy and excited to be back in the national team. Always looking forward to representing my country," he posted on Twitter.

Igesund conceded his team is lacking star players, with only two months to go until they Bafana Bafana host the Nations Cup.

"We need to work hard and that's very important. We've got no superstars in our team but nothing is impossible," he said.

"It's not always the best team that wins, but the team that really wants it the most."

"I think Steven had to make a very tough decision, but I haven't shut the door on him, so who knows where the conversation goes," Igesund said.