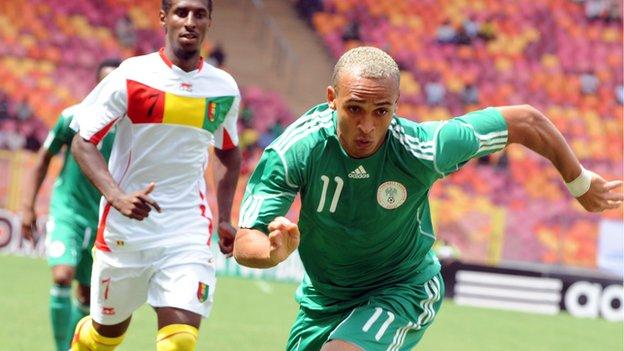 But the 31-year-old West Brom winger has conceded he is "unhappy" about certain aspects of the Nigerian set-up.

He told the Wolverhampton Express and Star: "I did not say I won't play for the national team.

"If the coach decides to call me, I am available to play for my country."

With the Africa Cup of Nations coming up in South Africa next year, between 19 January and 10 February, it would be a surprise if Odemwingie ruled himself out of being a part of Nigeria's plans.

That appeared to be the case when Keshi claimed at the weekend that Odemwingie no longer wanted to play for his country.

But the player, who has 54 caps and nine goals for Nigeria, has been quick to respond to Keshi's statement.

"When I decide that I want to stop playing, I will come out and say so myself," he said.

"I am 31 now, it will be hard to play every game, but I had an open and honest discussion with the coach and I will be available when they call me."

However, Odemwingie added: "I spoke with Keshi and I told him about my unhappiness with certain things in the national team.

"This included the fact that, as a player who has served his country with full commitment for over 10 years, I got into trouble for asking to be excused from a friendly game when I had an injury."

Odemwingie was omitted from Keshi's squad for the Nations Cup final-round qualifier against Liberia, which the Super Eagles won 8-3 on aggregate.

Nigeria have been drawn in Group C of the tournament, where they will face reigning champions Zambia, Ethiopia and Burkina Faso.