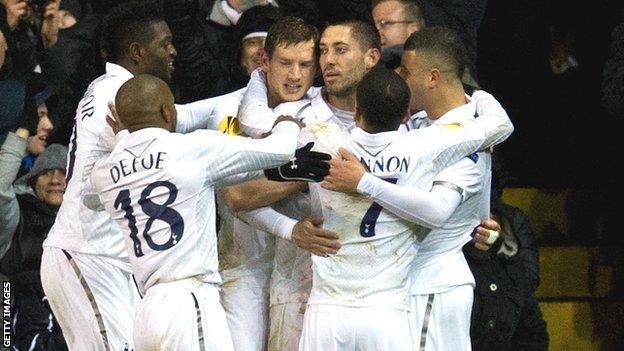 Seven British clubs have progressed into the next phase of European competition following the end of the group stages.

Celtic's dramatic win over Spartak Moscow on Wednesday clinched a place in the knock-out phase of the Champions League from a tough group that also included Barcelona.

The last 16 in the Champions League

But defending champions Chelsea were knocked out despite thrashing Nordsjaelland 6-1 at Stamford Bridge.

Manchester United and Arsenal had already qualified for the next round prior to the final match day, but Premier League champions Manchester City failed to qualify for the Europa League after losing 1-0 at Borussia Dortmund - a result that means they did not win any of their six Champions League group games.

Liverpool and Tottenham joined Newcastle in the last 32 of the Europa League after beating Udinese and Panathinaikos respectively on Thursday.

The draw for the Champions League last 16 and the knockout stages of the Europa League takes place on Thursday, 20 December.

The German side's 1-1 draw with Montpellier was enough to win the group as Arsenal lost to Olympiakos in their final game. The Greek side go through to the Europa League.

Malaga and AC Milan both secured their places in the last 16 before the final group games, with the Spanish side top. Zenit St Petersburg took the Europa League spot thanks to their win in Milan on Tuesday night.

Borussia Dortmund won the group and ended Manchester City's European season with a 1-0 win in Germany on Tuesday. Real Madrid are also into the last 16, with Ajax taking the spot in the Europa League.

Juventus won the group with a win against Shakhtar Donetsk that ensured Chelsea will have to make do with a place in the Europa League.

Bayern Munich and Valencia were already sure of their progress before the final round of matches and both teams rounded off their group campaign with wins.

The German side thrashed BATE Borisov 4-1 to ensure they went through as group winners, while Valencia beat Lille 1-0 in France. BATE already knew they would finish third and go into the Europa League.

Neil Lennon's side needed to better Benfica's result in the final round of matches, and the Portuguese side could only draw 0-0 at group winners Barcelona.

Benfica will now play in the Europa League.

Galatasaray pipped Cluj to second place behind United after a dramatic late win over Braga.

The Turkish side, who trailed to Mossoro's first-half goal, levelled through Burak Yilmaz's header and triumphed when Aydin Yilmaz tapped home after Braga keeper Quim failed to hold on to a shot.

That meant they finished above Cluj on the head-to-head rule, leaving the Romanian side to settle for a Europa League spot.

Liverpool won their group following their 1-0 win over Udinese.

Anzhi were already through, but slipped to a 3-1 defeat away to Young Boys.

Newcastle had already qualified but their 2-0 defeat away to Bordeaux saw them finish in second place behind the French side.

Tottenham ensured their progress with a 3-1 win over Panathinaikos at White Hart Lane, but they finished second behind Lazio, who beat NK Maribor.