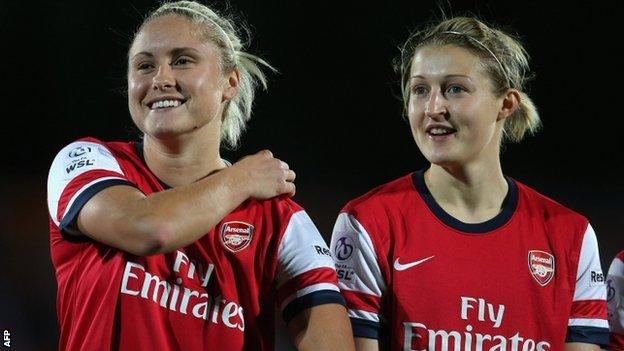 Arsenal Ladies will aim to become the first British side to knock out German opposition in the Women's Champions League on Wednesday.

The Gunners have a 2-1 lead over Potsdam from the first leg and are favourites to reach the quarter-finals.

Captain Katie Chapman said: "We dominated Thursday's game and could have put the tie to bed if we'd finished a few more chances.

"We'll go to Germany believing we can get the result we need to go through."

Arsenal, who won the competition in 2007, are in their 11th season in European football's elite competition and have never failed to reach the last eight.

But twice-winners Potsdam, who last lifted the trophy in 2010, have likewise always made it through to at least the quarter-finals.

Chapman, one of the first-leg goalscorers, added: "Potsdam are one of the very best teams in Europe and it's going to be really tough over there.

"But we've beaten them once, and if we can maybe get an early goal it will make it very difficult for them."