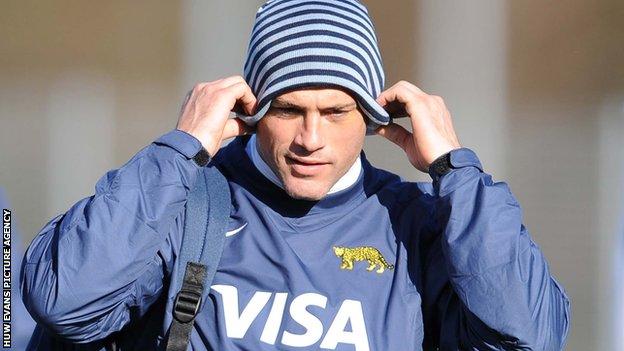 Argentina have recalled veteran centre Felipe Contepomi to face Wales at the Millennium Stadium on Saturday.

The 35-year-old former Leinster back, currently at Stade Francais, sat out the Rugby Championship due to an agreement between the Argentinian Rugby Union (UAR) and the French clubs.

He was not named in coach Santiago Phelan's initial Pumas squad.

Juan Martin Hernandez has been moved to full-back, while Bordeaux-Begles' Nicolas Sanchez starts at fly-half.

Biarritz centre Marcelo Bosch is unavailable due to his own club commitments this weekend, while Contepomi comes back into Phelan's starting XV to win his 79th cap for the Pumas

Argentina make six changes and two positional switches from the side beaten to Australia.

Alongside Contepomi in midfield will be former Harlequins and Stade Francais three-quarter Gonzalo Tiesi, who will make his first appearance since the 2011 World Cup.

Toulouse lock Patricio Albacete has been ruled out after suffering a fracture near his eye, with flanker Julio Farias Cabello moving into the second row to partner Manuel Carizza and Leonardo Senatore coming into the back row.

The 31-year-old, who has won 51 caps for the Pumas, is one of three players withdrawn from the Argentina squad for the visit to Wales.

In the front row Leicester's Marcos Ayerza benefits from the retirement of Rodrigo Roncero and the absence of Gomez Kodela to start on the loosehead side of the scrum alongside Eusebio Guinazu and Juan Figallo.

Juan Imhoff is rewarded for his impressive form during the Rugby Championship and for Racing Metro as he takes the left wing slot from Bath's Horacio Agulla, with Exeter's Gonzalo Camacho on the other flank.

Juan Martin Fernandez Lobbe captains the side from number eight and is set to win his 50th cap.