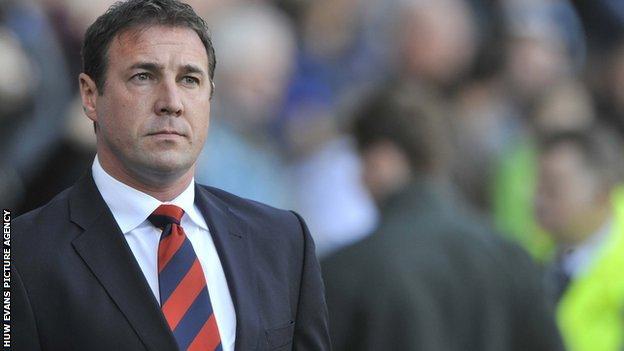 Pat Nevin believes Malky Mackay will be linked with the Scotland vacancy, but he does not expect the Cardiff boss to get the job.

Mackay is being linked with the job after Craig Levein was sacked by the Scottish Football Association.

"He is somebody I would have in a heartbeat, but I don't expect he will get it," said ex-Scotland winger Nevin.

Levein saw his Scotland side suffer a 2-0 defeat by Belgium in their last Group A World Cup qualifier.

That followed a 2-1 loss to Wales in Cardiff just four days earlier.

Mackay is already being linked with the job by the bookies, albeit as an 18-1 outsider.

But Nevin, who won 29 caps for Scotland, cannot see Mackay leaving his job with Championship leaders Cardiff for Scotland.

Mackay, 40, who won five Scotland caps, is in second season with the Bluebirds.

He led them to their first League Cup final, where they lost on penalties to Liverpool, and to the Championship play-offs in his first season in charge.

"He has got a very good job and he is doing incredibly well there with his sights on the Premier League," said Nevin.

"There is not a situation where he would walk away from that job even though the national team is always a good draw."

While Nevin believes Mackay, who was linked with Norwich City in the summer, will manage Scotland one day, he believes their are already two names being talked about as successors to Levein.

"The Tartan Army certainly have a number of ideas," said Nevin, a former Scotland winger.

"They certainly like the look of Gordon Strachan, but don't like the cut of the jib of Alex McLeish because he walked out on them, although, he is somebody who has a good record with Scotland.

"We don't have many great players at the moment, but we have plenty of decent managers and coaches as the Premier League tends to show week after week.

"Will any of them do any better than Craig Levein? I don't know. It won't be down to ability, but luck."

A Gareth Bale-inspired comeback saw Wales score two late goals in the last 10 minutes of the contest to snatch an unlikely win.