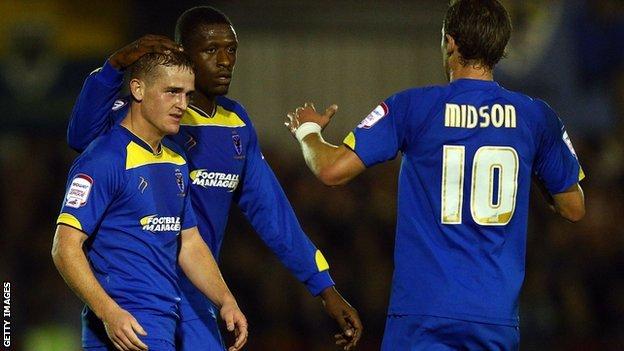 AFC Wimbledon needed extra-time to beat York City and set up a possible FA Cup second-round tie with MK Dons, who face Cambridge City in a replay on Tuesday.

Byron Harrison and Jack Midson netted to send Wimbledon through, although Reed hit a late third for York.

It had started well at Kingsmeadow for the visitors when Brown misjudged Daniel Kearns' cross and could only push the ball into his own net.

However, the Dons were soon level when Strutton bent the ball into the net following a pass from Rashid Yussuff, who was subsequently felled by a high, rash challenge from Kerr, who had already been booked.

AFC Wimbledon's rise through the leagues

The second yellow card condemned York, who lost 3-0 to Wimbledon in League Two at Bootham Crescent on Saturday, to play with 10 men for 55 minutes of normal time - and the extra 30 minutes, as it turned out.

Strutton tapped in from close range after York keeper Michael Ingham had parried his initial shot, but the Minstermen hit back to prolong the replay time when Reed controlled neatly with his right foot before coolly slotting home, a minute after coming on as a substitute.

Wimbledon swiftly recaptured the initiative early in the extra period when defender Clarke Carlisle misjudged Warren Cummings's cross from the left and the ball ricocheted in off Harrison, before Midson struck from close range.

Should Milton Keynes win on Tuesday, they will meet AFC Wimbledon for the first time in the clubs' histories.

AFC were set up in 2002 by disgruntled Wimbledon FC fans angry at a Football Association-appointed commission's decision to allow the club to move to Milton Keynes, and progressed up through the non-League pyramid before winning promotion to the Football League in 2011.

Wimbledon FC, who had ground-shared at Crystal Palace's Selhurst Park ground since 1991, eventually relocated to Milton Keynes in September 2003 and changed their name to Milton Keynes Dons the following summer.

"From the word go I thought we were excellent.

"We could have been three nil up before they got their equaliser.

"We had a poor performance on Saturday and we needed that tonight.

"To get the result to go with it would have been lovely.

"We haven't so there's a big disappointment there but we've shown again tonight what we're capable of."