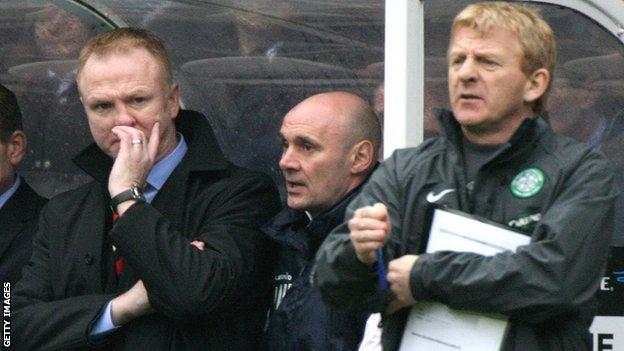 Alex McLeish has tipped Gordon Strachan to succeed Craig Levein as Scotland manager after distancing himself from a return to the role.

McLeish, who led Scotland to seven wins in 10 games in 2007, said: "Gordon could be the guy to galvanise them.

"I have already been the manager and enjoyed it tremendously [but] I want to get back into club management."

McLeish, who was sacked by Aston Villa at the end of last season after just 11 months in charge, is, along with Strachan and another former national manager Walter Smith, among the favourites to succeed Levein.

However, the 53-year-old Scot said he sees his future in the "day-to-day business" of club football.

"Walter Smith has monstrous experience, but maybe it is Gordon's turn due to where he has been," McLeish told BBC Radio 5 live.

Strachan, a former Scottish international who played for Aberdeen, Manchester United and Leeds United amongst others, has managed Coventry City, Southampton and Celtic, responsible for steering the Glasgow giants to the last 16 of the Champions League for the first time in their history.

His last management job was as boss of Championship side Middlesbrough. He quit in October 2010 after just a year in charge and now works as a football pundit on television.

"He has a very good television job, but maybe he is too much in a comfort zone and wants to get back in among the players again," said McLeish.

Former Scotland striker Kevin Gallacher is another who believes Strachan could resurrect the nation's football fortunes. "He's a younger manager and his enthusiasm could rejuvenate us," he said.

However, Gallacher was quick to highlight other candidates, among them former Scottish internationals Kenny Dalglish and Joe Jordan.

He also thinks Smith, who was Scotland boss from December 2004 to January 2007, would be a good option.

"Walter Smith has unfinished business," said Gallagher. "He's experienced and done it before. Bring him in and give him another shot."

Jordan, 60, has been out of work since Harry Redknapp's surprise sacking by Tottenham Hotspur in the summer. The Scot spent four years as a member of the first-team coaching staff at White Hart Lane.

"For my name to be mentioned, yes, it's nice to be linked with the national job," said Jordan, who has managed Hearts, Stoke City and Bristol City.

"What that job entails is not easy because of the situation the new man would find himself in. He's halfway through a campaign and he would need snookers. He would need results elsewhere to go for him. He would want to go into the job with a prospect of qualifying."

Levein took over in December 2009 and was in charge for 12 games, winning three, drawing four and losing five.

Under-21 coach Billy Stark has been put in temporary charge ahead of next week's friendly against Luxembourg. SFA chief executive Stewart Regan said they would give themselves "time" in finding a replacement.

Former Scotland midfielder Craig Burley thinks not all the candidates would be interested - or suitable - for the vacancy.

"People are putting their reputations on the line by taking this Scotland job," he said. "It's a tough job.

"What you're looking for is someone who doesn't want to use this job as a launchpad back into the Premier League. It needs to be done over a long period. Whoever gets the job needs to see it through.

"For 10 years-plus, this generation of players has not been able to get Scotland anywhere near a major championship. I'm not saying it's impossible, but it's pretty difficult.

"The group didn't help this time. Because of the co-efficient, we were always going to be in a tough group."