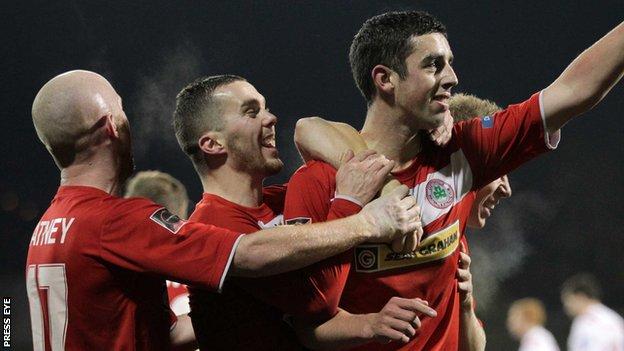 Premiership leaders Cliftonville came from a goal down to claim a League Cup semi-final place with a 3-1 home win over Portadown on Monday night.

Portadown led for most of the match thanks to Chris Ramsey's close-range header in the second minute.

Liam Boyce beat a defender and found room to shoot Cliftonville 2-1 up five minutes later and sub Diarmuid O'Carroll made sure with a late third.

"We were guilty of giving a goal away early on, but after that I thought the lads were exceptional," said Cliftonville manager Tommy Breslin.

"They played great football tonight and ran out easy winners.

"When we are in this sort of form you just have to enjoy it."

Cliftonville, three points clear at the top of the Premiership, face champions Linfield in a huge league clash at Solitude on Saturday.