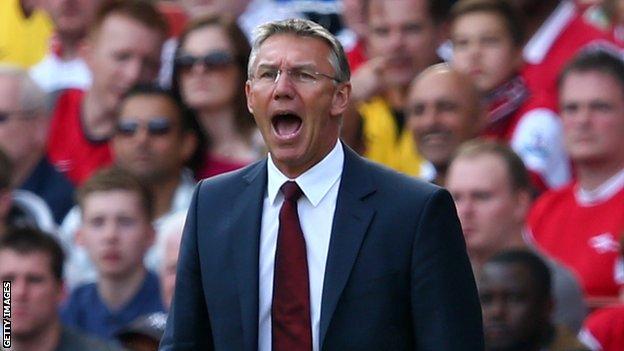 Nigel Adkins accepts he is favourite to become the first managerial casualty in the Premier League this season after Southampton suffered their eighth top-flight defeat of the campaign.

I'm very positive... I know I'm a better manager today than when I joined Southampton

"I'm not going to hide away from that, but what a great challenge we face."

Southampton have failed to pick up a single away point this season. Despite enjoying plenty of possession at The Hawthorns, they were undone twice by Odemwingie, who scored either side of half-time.

Saints have now conceded 28 goals in the league this season and are now five points adrift of safety, but Adkins remains positive about his side's chances of avoiding relegation after just one season in the division.

Adkins, who took over as Saints boss just over two years ago, added: "I'm very proud and privileged to be the Southampton manager. I'll stand out and lead from the front as I've always done.

"I'm very positive. I know I'm a better manager today than when I joined Southampton. I know I've improved a lot."

Three of Southampton's next four league games are at home.

Defensive woes for the Saints

They host Swansea on Saturday before travelling to Loftus Road to face fellow strugglers QPR on 17 November. They then host Newcastle and Norwich on 25 and 28 November respectively.

Adkins started with Paulo Gazzaniga in goal against West Brom, dropping Artur Boruc, following an incident in a recent game with Tottenham.

"I'd like to think that would be concluded quickly," said former Scunthorpe boss Adkins. "Because of that, he has not been selected."