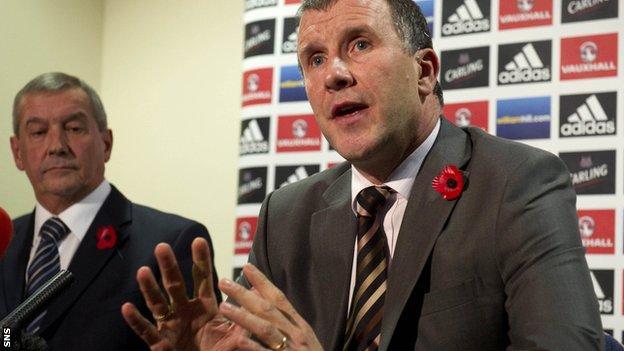 Peat, who helped appoint Levein in 2009, agreed that results had been disappointing.

"I can't believe that it took three weeks to make a decision," he told BBC Scotland. "To be honest, it could have been made in a couple of days.

"I certainly would have had the decision made long ago."

I think the SFA is a bit of a shambles

Scotland slumped to the bottom of World Cup qualifying Group A after they lost 2-0 in Belgium on 16 October.

The SFA said that discussions over his future would be delayed until after the national coach returned from a week's holiday.

However, that was again delayed, with the board saying it wanted to gather further information over the weekend.

The announcement was made at a Monday-evening media conference at which it was said that Levein was being relieved of his duties as coach but that the SFA would honour his contract, which has another 20 months to run.

"I understand Craig was on holiday for a week, but that's only one week out of three," said Peat.

"It doesn't take a rocket scientist to work out how much he was getting and what was the balance of his contract.

"It doesn't take a rocket scientist to work out, had he stayed, what the SFA would have lost in revenue from three home matches because the morale of the supporters is rock bottom and I could not see a full Hampden Park had he carried on.

"What's disappointed me is that I believe there weren't really meetings held.

"I don't know what happened today, but my understanding was that most of this was done by conference call and I cannot believe that such an important decision was left to a conference call.

"I've had many a conference call in my time and they are not satisfactory at all."

Peat also thought it was poor timing to leave the decision until the day before Levein was due to announce his squad for next week's friendly against Luxembourg.

"I think the SFA are a bit of a shambles," he told BBC Radio 5 live. "Why has it taken so long?

"Part of the meeting today I hear was convened via conference call to some of the board members.

"They couldn't even be bothered for whatever reason to get their backside there to make one of the biggest decisions in Scottish football."

"I think Regan and Ogilvie certainly will have to be looked at," he said.

"I understand Craig Levein didn't bother pitching up today either because, although the results have been bad, he just said 'look, make a quick decision, treat me properly, if you don't fancy me, let's get it cut and dried, just do it', but they've just flaffed around and it's just made the situation worse."