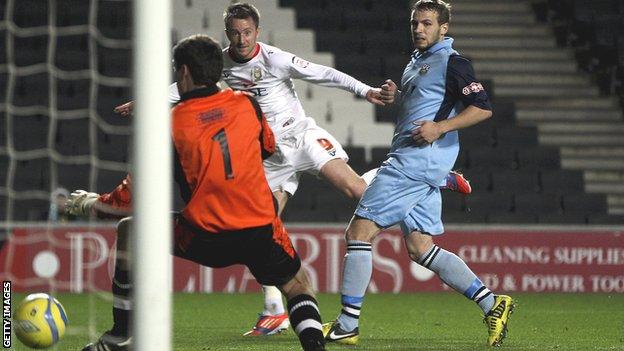 The Dons set-up the historic clash - against the club formed in response to Wimbledon's move to Milton Keynes - with a thumping victory.

The Dons will host AFC Wimbledon - who beat York in a replay of their own on Monday - on the weekend of 1 December in the standout tie of the second round.

It is a game that has been 10 years in the making - ever since AFC were set up in 2002 - and sees the coming together of two clubs intrinsically linked by a common past.

This is a fixture that should never happen. I'll watch it at Kingsmeadow or go to a garden centre or something

AFC were founded when disillusioned Wimbledon fans, unhappy with the decision by a Football Association-appointed commission to allow their club to be uprooted, formed a club in nearby Kingston-upon-Thames, starting life in the ninth tier of English football.

Following five promotions in nine seasons, AFC rose to the Football League in 2011 and, despite them never having faced each other before, the animosity between the clubs continues to run deep.

The debate over which team should possess the claim to Wimbledon's history rumbled on until 2006, when MK relinquished their connection to anything pre-2004.

Campaigns are still run by groups in south London attempting to persuade MK to drop the Dons portion of their title - a reference to the nickname of the original Wimbledon - and sections of the AFC support had vowed to not travel to Buckinghamshire for the tie in protest of MK's existence.

Cambridge, of the Southern League Premier Division, were resolute on their own patch 10 days earlier to force a 0-0 draw and earn themselves a memorable evening in the unfamiliar - if sparsely crowded - surroundings of Stadium MK.

But their keeper Zac Barrett, superb in the first game, was left wanting for the goal that finally put the Dons in front, allowing Williams's drive from just inside the City half to dip over his head and in.

MK remained patient in their pursuit of the killer blow and put the tie beyond doubt just before half-time when firstly O'Shea, who had earlier clipped the bar, finished tidily from the edge of the box and then Bowditch tapped in the loose ball after Barrett had made a superb stop from Ryan Lowe.

But Williams converted from the spot after Charlie McDonald was fouled by Tom Pepper, before 16-year-old Alli registered his first senior goal from distance and Chicksen made it six with a simple finish.

It means attention can now turn to a second-round tie bubbling with emotion and typical of the stories the FA Cup has become renowned for producing.