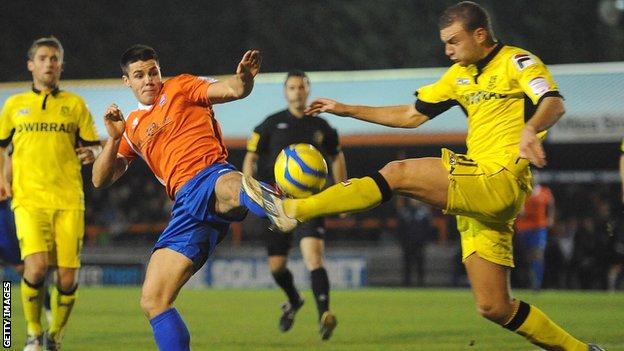 Tranmere saw off the challenge of non-league Braintree to set up an FA Cup second-round tie with Chesterfield.

Rovers took the lead when Joe Thompson bundled the ball home after Danny Naisbitt could only parry Cole Stockton's superb volley into the air.

After the Iron's Luke Daley poked tamely at the keeper when clear on goal, Stockton struck from the edge of the area to double Tranmere's lead.

Stockton was again involved setting up Max Power to fire in to ensure the win.

The scoreline appeared to flatter the away side, who began on the back foot in this re-arranged fixture, after the original shortly before kick-off because of a waterlogged pitch.

Despite falling behind when Thompson capitalised upon Naisbitt's block, the Essex side certainly showed they were no pushovers, with Daley twice coming close to equalising.

However, shortly after the break, Stockton turned a Braintree defender and slammed home a shot which stung the fingertips of Naisbitt as it flew into the net.

And with only minutes to go, substitute Power calmly found the net after being set up by the effervescent Stockton.

Victory ensures that Tranmere will be in round two.

"I think we needed to score early if we were going to push on and get the result. I was disappointed with the goals and the few injuries I've got.

"We tried to get it down and play, but late on in the game we've just humped it (forward) and lost our rhythm a bit, but I'm proud of my boys.

"If you look at the first two goals we've given away, both are defensive errors really, the two centre-halves got spun.

"I'm not going to be too critical, we just pick ourselves up now, we've got Grimsby on Saturday."

"It wasn't a sparkling performance, but you come to grounds like this, you have to knuckle down.

"All credit to Braintree, they played well and had a couple of half-chances.

"We got goals at the right time, without really getting out of first gear.

"We'll be lucky if we can patch a side up for MK Dons on Friday."