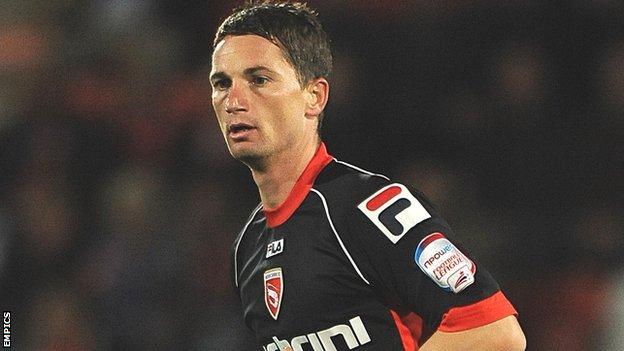 Gary McDonald scored the only goal of the game as Morecambe beat Rochdale to earn themselves an FA Cup second-round tie at Coventry.

The hosts made a strong start as Ashley Grimes had three chances, including a free header he put over the bar.

But it was Morecambe who scored just before the break when McDonald bundled the ball into the net after Josh Lillis saved Lewis Alessandra's header.

Grimes also went close after the break but shots on target were at a minimum.

The initial game between the two sides Andy Fleming put Morecambe ahead, but Rochdale earned a replay with a second-half goal from Jason Kennedy.

Morecambe were boosted by the return of goalkeeper Barry Roche from a leg injury and, despite the home side making the early running, the former Nottingham Forest man was not severely tested.

The visitors' game-winning goal came thanks to a fine run and cross by Izak Reid and McDonald pounced after Alessandra was superbly foiled by Lillis.

Dele Adebola had a chance to level in the closing stages but his header was deflected over the bar.

"It doesn't matter how you get through in the Cup, it's all about the result and we got that result.

"We've got a nice tasty tie now at Coventry. The pressure will be off us.

"As players, there's nothing better than the FA Cup. It's just fantastic to get the result and I'm made up for everyone concerned."